From #FakeNews to conflicting politics and social media scandals, people are less trusting today than ever before.

From #FakeNews to conflicting politics and social media scandals, people are less trusting today than ever before. That includes trust in politicians, trust in institutions, and certainly trust in the media.

But what about trust in one another?

All across the country, people are casting doubt on powerful organizations and even their own employers, but how do they feel about the people around them? What do conservatives think about leaving someone who doesn’t speak fluent English alone in their homes? How do parents feel about a gay man watching their children? And if they were sick in the hospital, how would most people react to having a woman as their doctor? Read on as we break down some of the biggest barriers driving a wedge between neighbours. 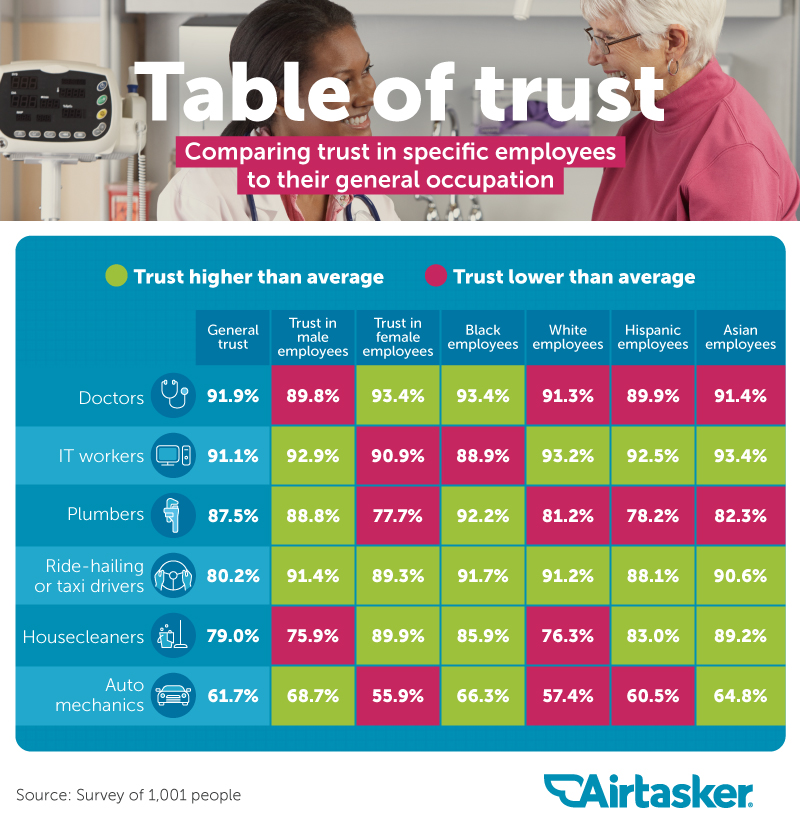 Depending on your industry, you might look around at your co-workers and feel a certain imbalance in the number of men and women working alongside you. While men dominate jobs including biomedical engineering and web development, women account for a majority of the workforce in public relations and social services.

In 2016, women made up less than 2% of motor mechanics. While less than 62% of people surveyed trusted auto mechanics in general, under 56% trusted mechanics who were women. Respondents only seemed to have a more positive opinion when the mechanic in question was either a man, Black, or of Asian descent.

In contrast, men were less likely to be trusted as housecleaners or doctors compared to women with the same jobs. Female employees seem to have a dominating presence in certain aspects of the health care industry, and over 93% of people trusted the idea of a female doctor compared to less than 90% who trusted male doctors. Those surveyed expressed more comfort with black medical practitioners (over 93%) compared to white doctors (more than 91%), Hispanic doctors (almost 90%), and Asian doctors (over 91%). 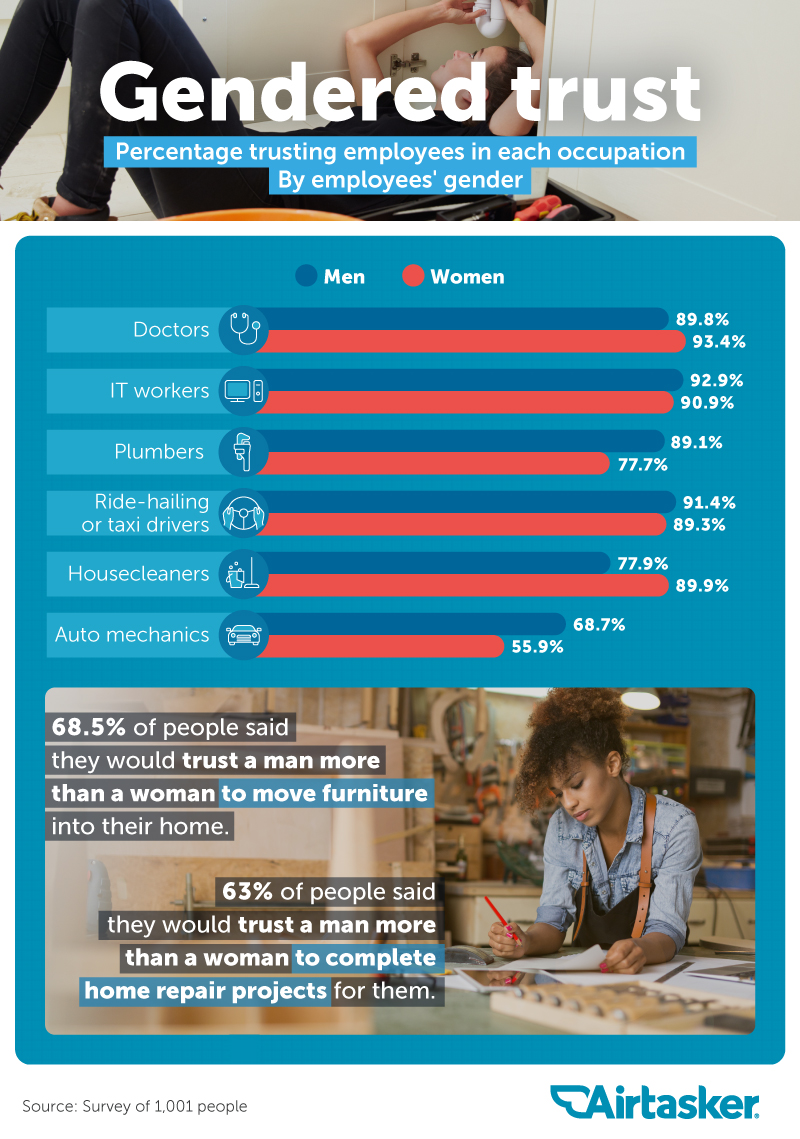 An oil change or a routine physical won’t be the only times you encounter distrust of the employees in question.

While men and women generated about the same trust as IT specialists or drivers, there was a gap to overcome in other industries. Eighty-nine percent of people trusted a man to do their plumbing, although less than 78% could say the same for a woman. Similarly, nearly 69% of people trusted a man more than a woman to help move furniture into their home, and 63% said the same about hiring a man to complete their home repair projects. Research has shown roughly 1 in 3 people believe their workplace has balanced gender representation, and discrimination towards women is often higher in industries dominated by men. 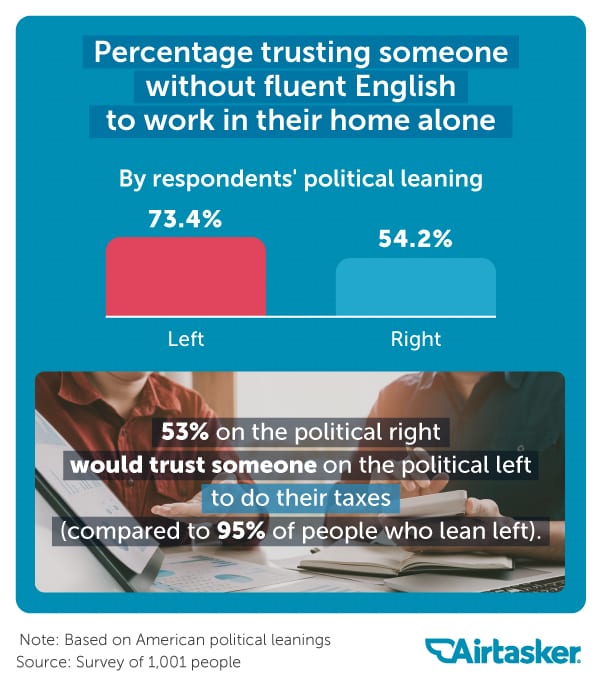 Across the U.S., an estimated 54 million Hispanic people make up the largest minority presence. Of those, some 43 million speak Spanish. Hispanic people, however, were among the least trusted employees in several of the industries studied.

For some, the language barrier can act as a roadblock for trust. While over 73% of liberals were comfortable trusting someone who doesn’t speak fluent English to work alone in their homes, just 54% of conservatives said the same. 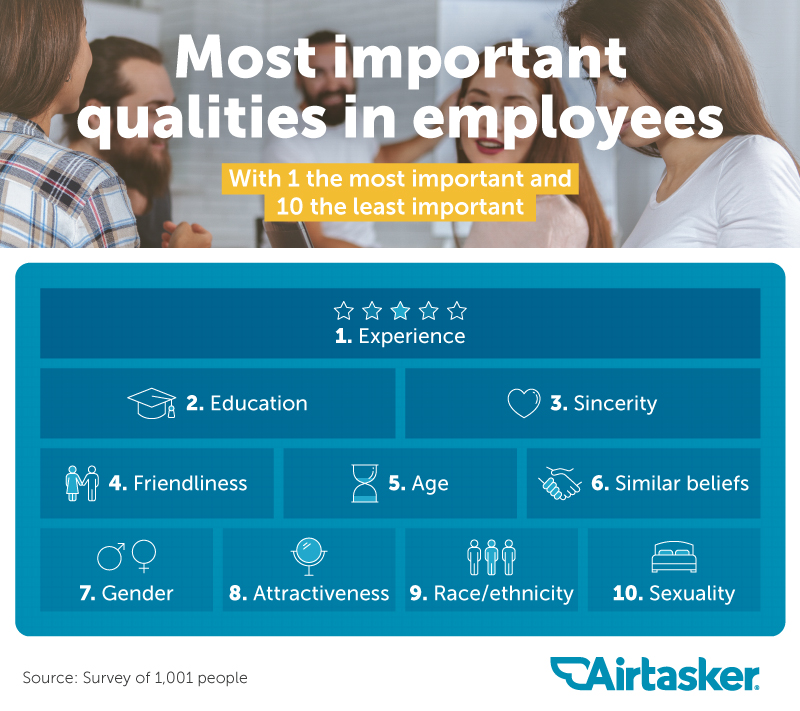 Building trust with customers or clients can be complicated. Everything from making a customer wait to filling out unnecessary paperwork can chip away at the rapport you’ve already built, and many industries have to find a balance between profitability and success and establishing a trustworthy relationship.

When asked to rank the most important qualities in a worker, people rated experience, education, and sincerity as the most valuable traits. Additionally, people ranked race and sexuality as the least important elements in deciding whom to work with.

Getting the job done

Whether you’re trying to select a doctor or plumber, it takes a lot to build trust with the people who work for and with us. As we found, some industries can be more forgiving than others. When asked about hiring a housekeeper, people were more comfortable trusting a woman, although they were much less comfortable with women as plumbers or mechanics. Still, nothing mattered more than experience, education, and sincerity when hiring someone.

At Airtasker, we’ll help you do more than find someone to get the job done – we’ll help you find someone you can trust with your to-do list. With more than 2 million people ready to help, Airtasker helps you manage everything from furniture assembly to handyman work and gardening jobs. Whatever you need doing, we’ve got the crew for you. Visit us at Airtasker.com to learn more.

To gather the data presented above, a survey was run using Amazon’s Mechanical Turk Service. The makeup of the respondents is as follows: 95 baby boomers, 271 Gen Xers, 618 millennials, and 17 people from outside those specified generations. 495 of the respondents were female, 502 were male, and 4 chose neither. Respondents in the survey were all from the United States.

The survey was conducted by showing respondents a randomized image from a group of 8 images of people of varying races and genders for different occupations and asked how much they would trust that employee in that occupation. All data in this survey rely on self-reporting, which can be host to a number of issues, such as telescoping or exaggeration. To combat these issues, an attention check was used in the survey.

Building trust is hard, but we’re willing to extend an olive branch with this study. Share the results of our survey with your readers as long as the content is used exclusively for noncommercial purposes and includes a link back to this page for credit.