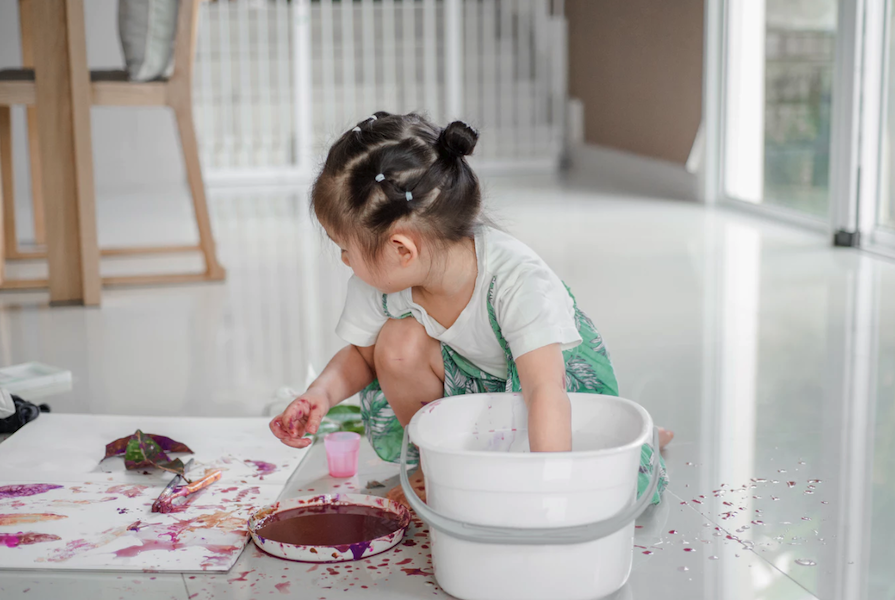 Most of us have been there – sulking as we make our bed, clean the dishes, or put away every toy in our room. Chores were never fun as a kid, especially when it kept you from playing outside with friends. But if the chores came with cash, tidying up and doing as you were told got a tad bit easier. However, not every kid is driven to do chores by monetary incentive; while chores are said to create successful adults, adding money to the mix might not be all that effective.

While modern parents debate the “right” way to instill a work ethic in their children, what childhood jobs have stood the test of time? To find out, we surveyed nearly 1,000 people about their childhood chores and if they were ever paid for their work. Keep reading to see what we found.

Besides the debate about compensated chores is a bigger issue: The gender pay gap present in childhood carries over into the workplace. It’s no secret that there is still a significant difference between what men and women make for the same job, but most people wouldn’t expect this to be an issue with childhood allowances. Nevertheless, the median weekly allowance was double for men what it was for women when they were children, according to our study. Compared to girls making an average of just $5 weekly, boys made an average of $10. And this trend continued for adult salaries. For men and women who were expected to do household chores as children, men grew up to make $12,000 more than their female counterparts, on average.

The chores children did also differed by gender. The majority of women (55.4%) said they babysat, and nearly 50% of men said they mowed lawns. However, yard work was common for both genders, with 21.5% of women taking their chores outside, and 38.1% of men doing the same. Despite this similarity, women were still more likely to do domestic chores – such as taking care of pets and cleaning the house – while men did more outside work like shovelling snow, washing cars, and even helping with the family business.

The gender roles present in childhood aren’t left behind when entering adulthood, though. Women continue to bear the load of household chores, spending twice the amount of time on each compared to men.

Finding a job as an adult usually starts with a quick internet search. Children, on the other hand, may get job recommendations from their parents. Across all generations, parents were the top job source, with millennials using this method more than their older counterparts. While finding jobs through friends was more popular among baby boomers and Gen Xers than millennials, going door to door to find work may certainly be a thing of the past. Compared to 27.5% of baby boomers knocking on their neighbors’ doors, only 24.2% of Gen Xers and 18.2% of millennials used the same tactic. 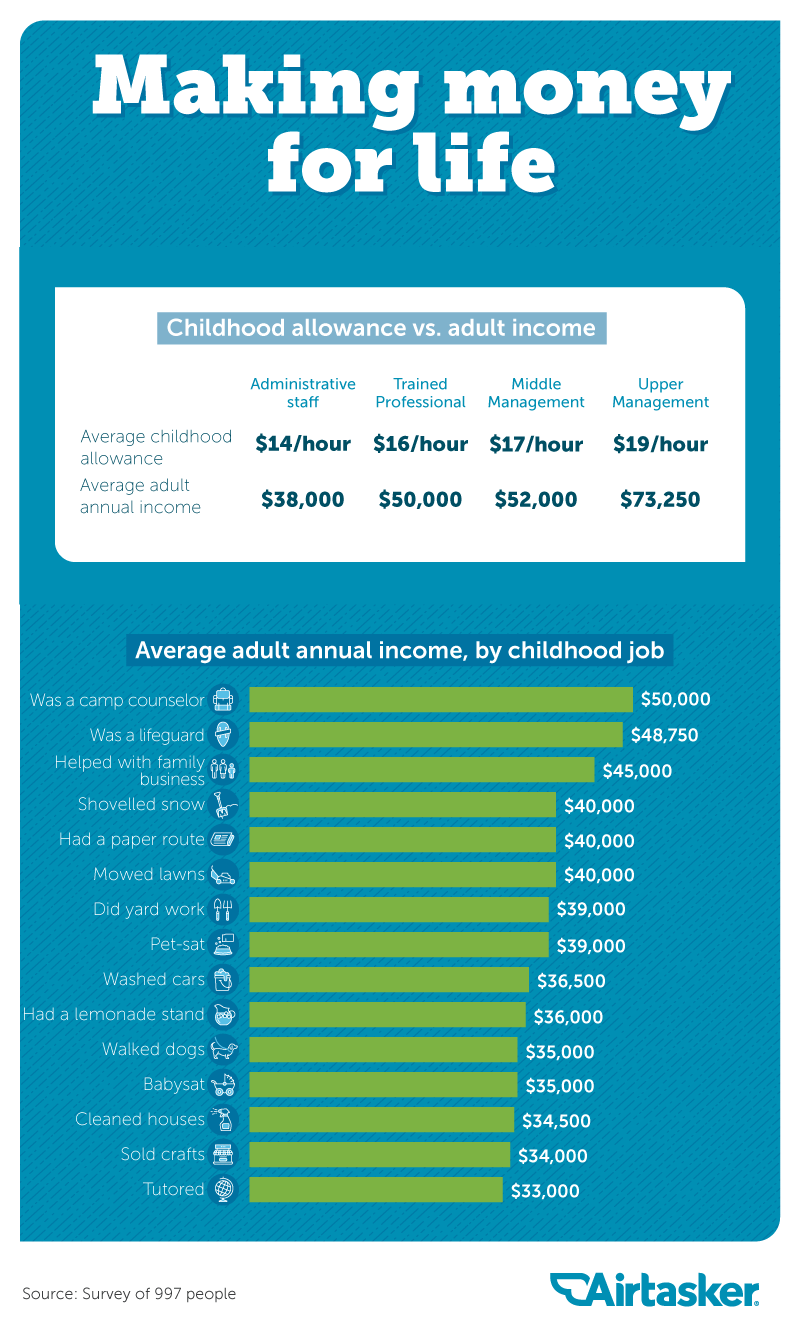 When looking at jobs held by children, people who worked as camp counselors and lifeguards as kids made the most as adults. Young camp counselors grew up to make an average of $50,000 annually, while child lifeguards made an average of $48,750 later in life. Children who cleaned houses, sold crafts, and worked as tutors ended up making the least as adults, with each childhood position leading to less than $35,000 in annual salary. While the jobs people take up as children certainly impact their future, a better predictor of a child’s prospects is his or her parents’ household income.

When looking at jobs held by children, people who worked as camp counselors and lifeguards as kids made the most as adults. Young camp counselors grew up to make an average of $50,000 annually, while child lifeguards made an average of $48,750 later in life. Children who cleaned houses, sold crafts, and worked as tutors ended up making the least as adults, with each childhood position leading to less than $35,000 in annual salary. While the jobs people take up as children certainly impact their future, a better predictor of a child’s prospects is his or her parents’ household income. 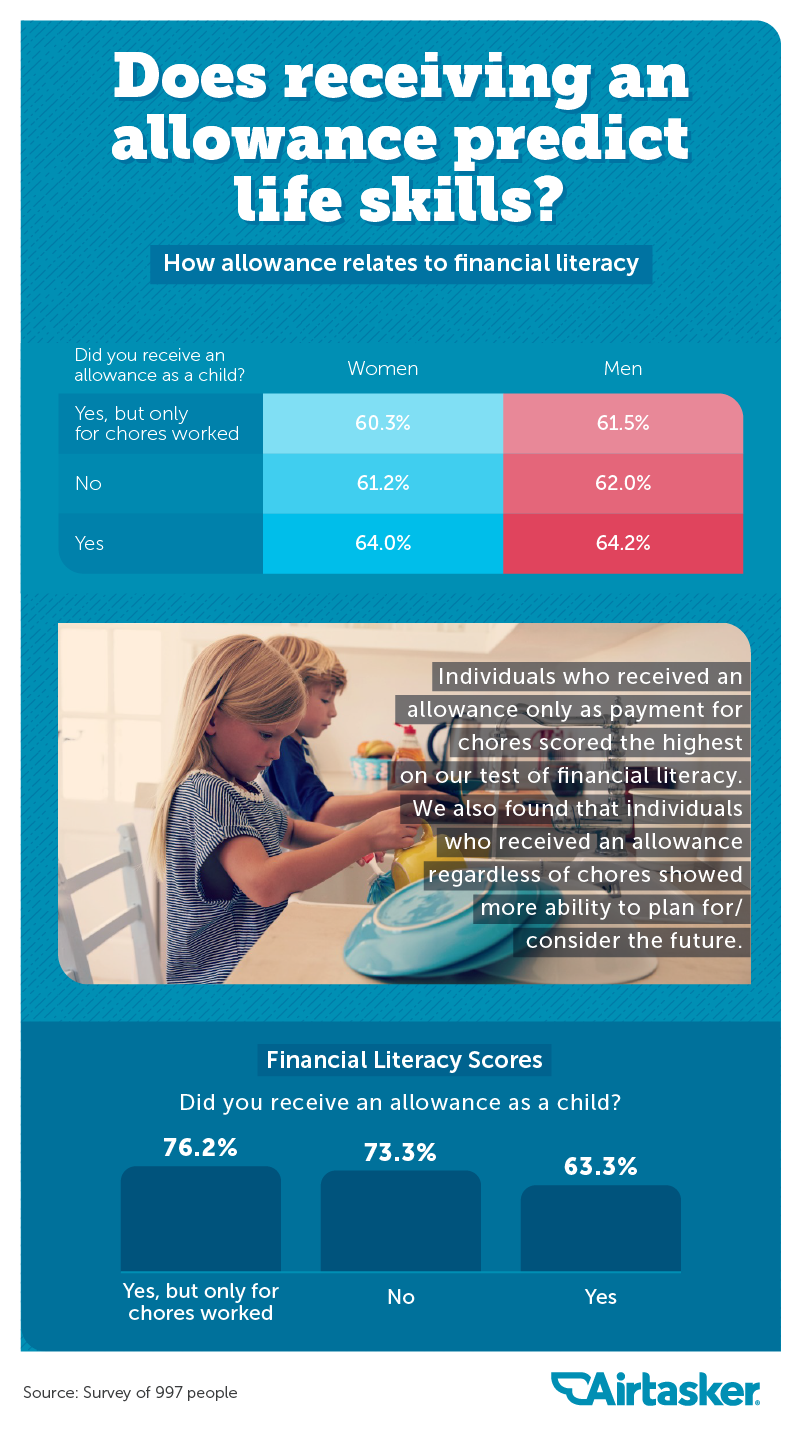 The debate about compensating children for chores is rooted in its future impact. Do monetary rewards teach children how to handle money, or do they create a sense of entitlement? There’s no clear answer, but individuals who only received payment for completed chores scored the highest on our financial literacy test. However, people who received an allowance regardless of chores completed scored higher when we measured respondents’ ability to plan for and consider the future.

Considering that schools fail to teach children financial literacy, the responsibility often falls to the parents. And while each person parents differently, the lessons taught by compensating children for chores may outweigh the backlash and controversy surrounding the topic – especially when teenagers’ financial literacy is declining. 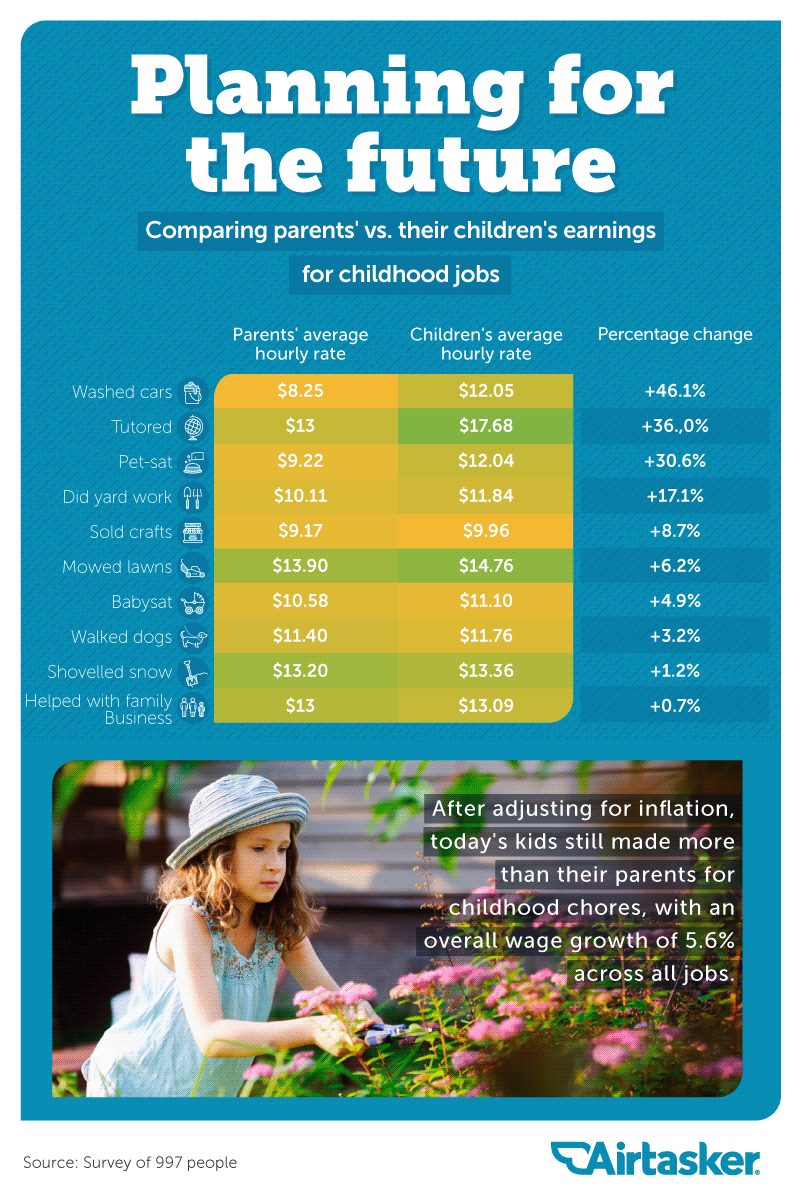 There’s been a lot of talk about millennials being worse off than their parents, even though some studies have found that younger generations earn more than their older family members. Our study’s findings support the latter, though – even when adjusting parents’ earnings for inflation, kids earned more per hour than their parents for nearly every childhood job. The greatest difference was with children who washed cars, who earned nearly 50% more in adjusted pay per hour when compared with their parents. Despite making more for each childhood job and accounting for inflation, respondents may still struggle financially due to the continuous rise in the cost of living. 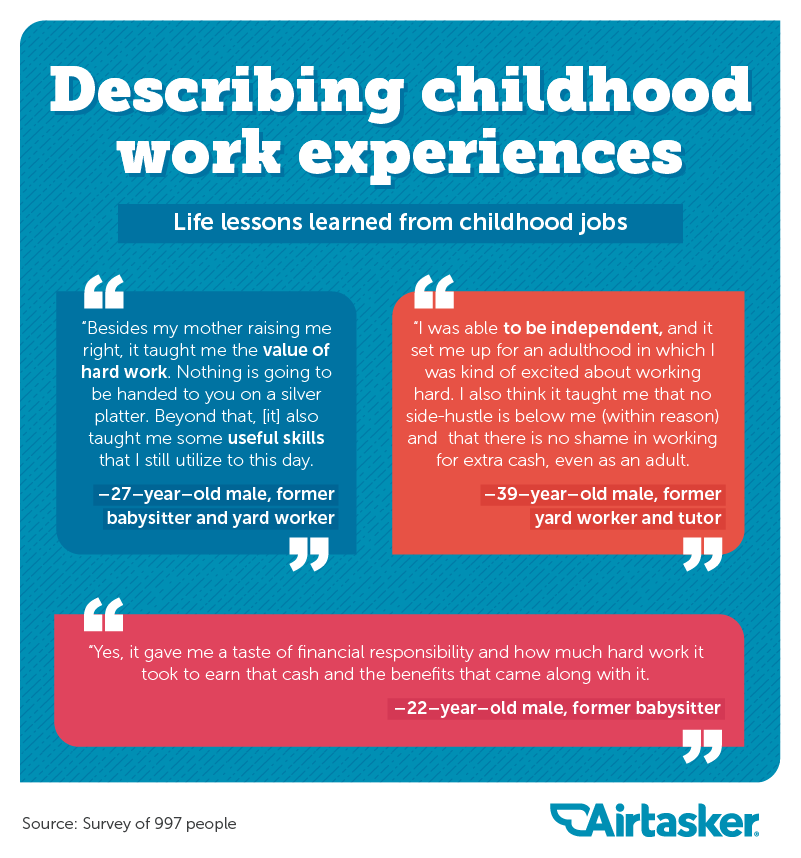 While people examine the impact of chores and compensation on children as they grow up, those who shared this experience had nothing but positive things to say. From the value of hard work to financial responsibility, people found chores and childhood jobs to be beneficial beyond just cash. If handled properly, entitlement can be avoided, and major life lessons can be instilled at a young age.

There will likely never be a time when children don’t huff and puff about cleaning their room or doing the dishes. But as they get older and pick up jobs to earn money, they may begin to appreciate the lessons and benefits that responsibility can bring. It’s not entirely clear if chores and allowances lead to higher-paying jobs in adulthood; however, getting a taste of the working world as a child or teenager can help develop aspirations and goals for the future.

At Airtasker, we understand the value of work. Whether you have your dream job and are just looking for a side hustle or could use some help getting tasks done, we’re here to help you find work (or a Tasker). Easily post a task or search available tasks on our app or website so that you can check off your to-do list. To learn more, visit us online today.

Data were cleaned in Excel, and visualizations were made in Tableau. Statistical analyses were conducted in Jamovi.

Interested in sharing our findings on childhood chores, jobs, and compensation? The graphics and information from this project are available for noncommercial reuse. Feel free to share them as much as you’d like across the web, on social media, and at work. Just don’t forget to link back to this page to give the authors proper credit.

Who do you trust?