Despite record-low unemployment numbers, many Western countries are struggling with a new phenomenon: underemployment. In Australia, more than 1 million "Underemployed, overly frustrated" 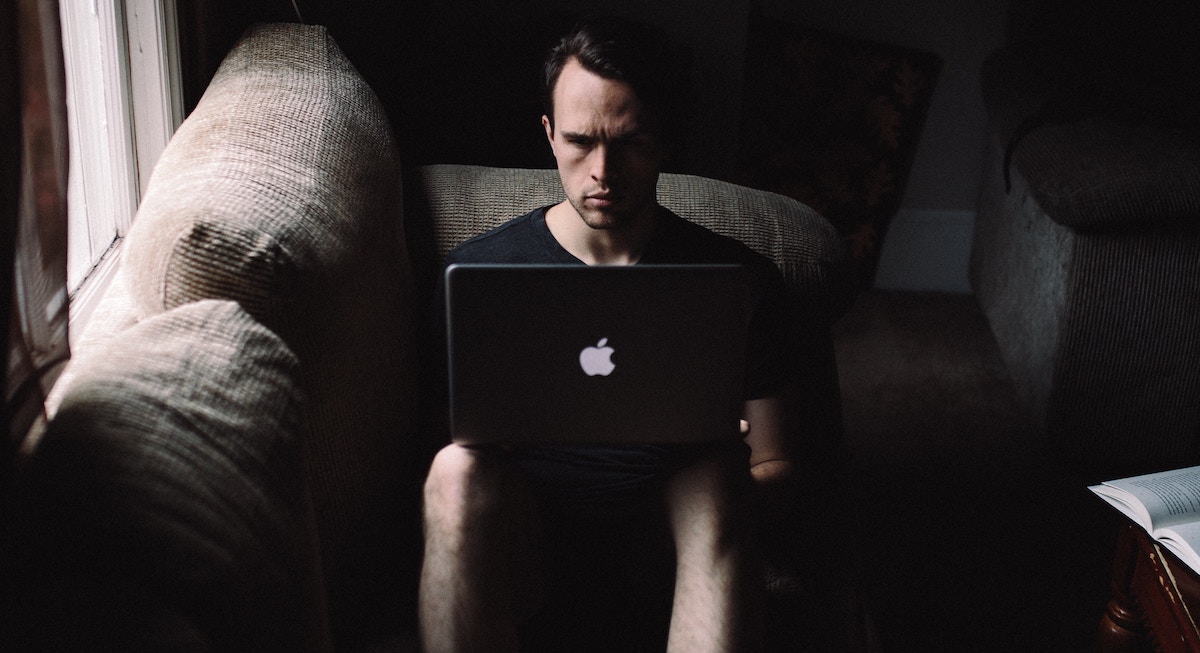 Despite record-low unemployment numbers, many Western countries are struggling with a new phenomenon: underemployment.

In Australia, more than 1 million people –8.2% of the workforce –are currently underemployed. In 2017, roughly 9 million part-time employees in the EU were actively looking for more hours. In the U.S., the federal minimum wage is just $7.25 and has not seen an increase since 2009, a rate many analysts suggest isn’t keeping up with rising inflation and cost of living. In fact, one study found the “real wage” in America actually declined by 1.3% between 2017 and 2018 once the average wage increases (3.2%) were adjusted for inflation.

For a closer look at the impact of underemployment – defined here as employees whose jobs don’t meet their economic needs (or level of training) – we surveyed 990 full-time employees about their compensation, job satisfaction, and the salaries most people feel they deserve. Nearly half of the people we polled may have gotten a promotion within the last year, but was it enough and did it make them feel better about their jobs? Read on to see what we uncovered. 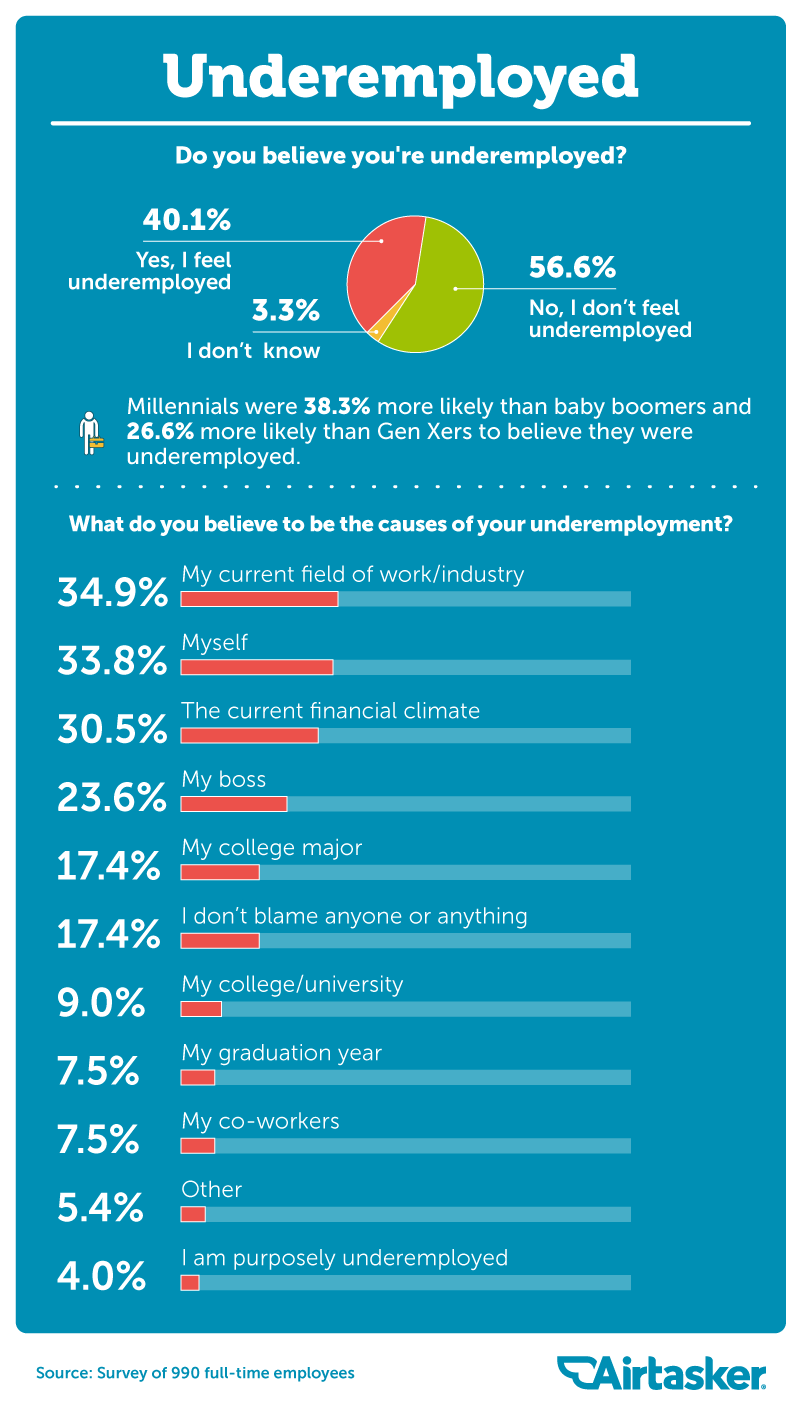 Unlike unemployment (which globally reached its lowest level since 2008), underemployment can define a broad range of experiences in the workplace. While a person who is underemployed still has some form of job and compensation, they may not be getting as many hours as they need, or they may be working below their qualifications or for less money than they would like.

When asked about the cause of their underemployment, people we polled were more likely to point to their industry (35%) than themselves (34%) or the current financial climate (31%) as reasons they might be underpaid or overqualified. Amongst the most underemployed positions in the U.S., cashier, retail associates, security guards, and patient services representatives may account for some of the most frustrating industries to work.

By some qualifications, an underemployed person may be just as likely to see themselves as unemployed based on their circumstances. Not earning a living wage, not having health insurance, and not working regular, full-time hours can present many of the same obstacles as not working at all. For the last three decades, the underemployment rate for college graduates between the ages of 22 and 65 has consistently remained at 33%. For more recent, younger college graduates, the rate of underemployment has been steadily rising for years – reaching as high as 44% in 2012. 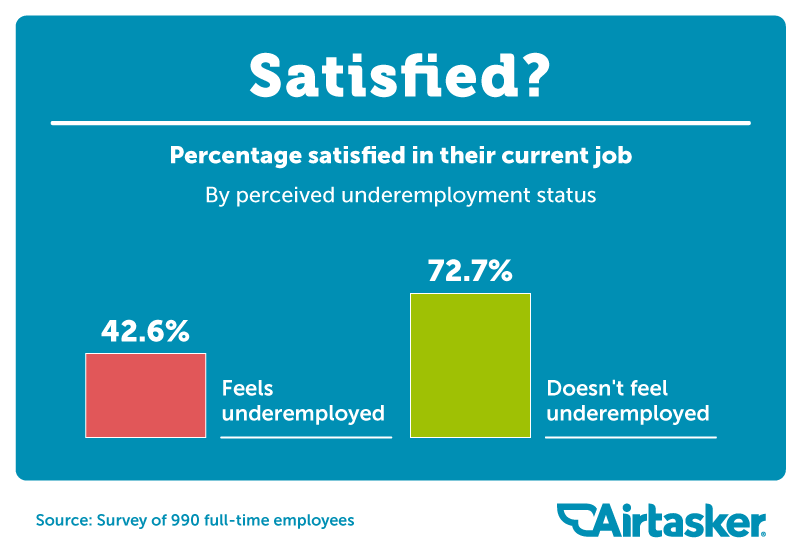 There are a variety of ways compensation can negatively impact both job satisfaction and trust. In one study, profit-based payment structures (those where employees have the opportunity to earn bonuses and additional pay based on company performance) were typically more likely to promote a negative relationship between the employee and their employer. In contrast, performance-based compensation, where employees have the opportunity to “earn” additional income, tends to increase job satisfaction and commitment. 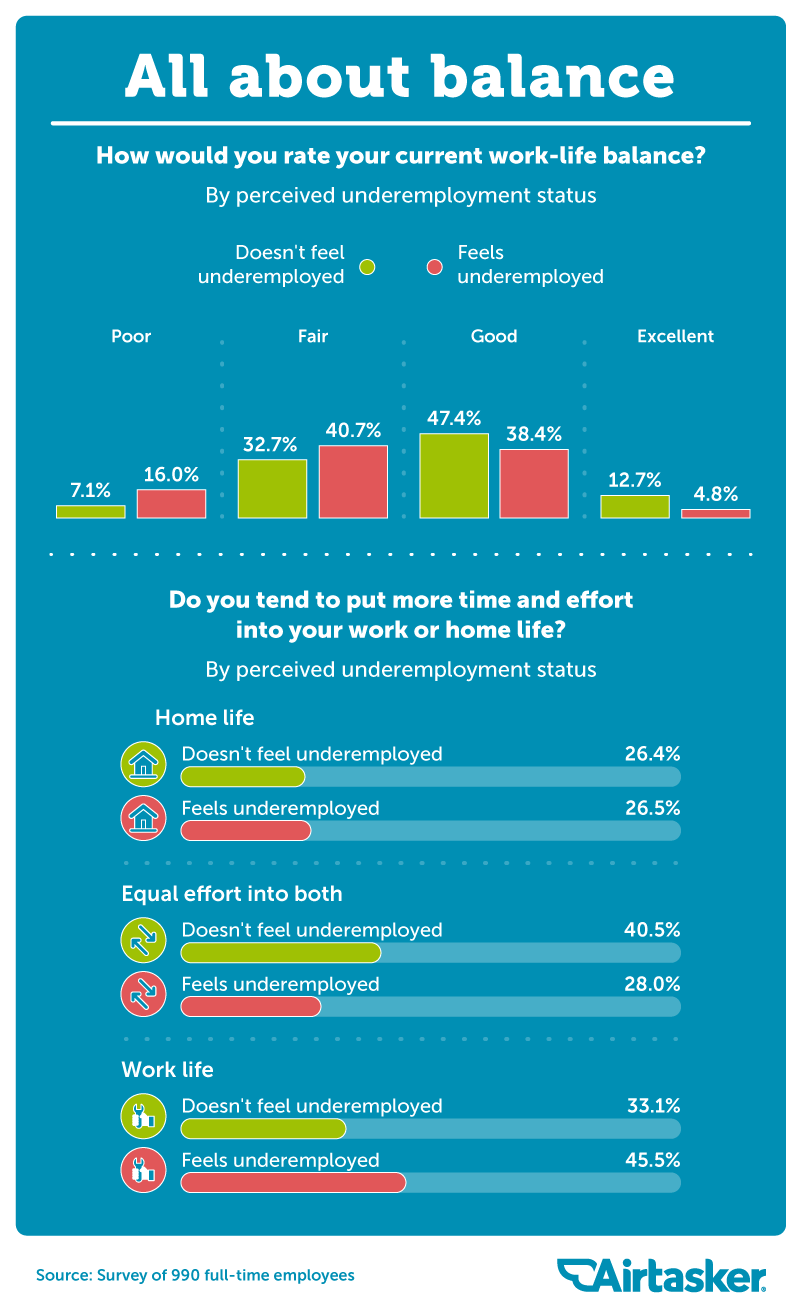 For many people, job satisfaction isn’t exclusively about compensation. Similar to the topic of underemployment, work-life balance is often described intimately related to the health of the workplace environment. Chronic stress, among the most commonly reported health issues in the workplace, can lead to both physical and mental health concerns, and over a long enough period of time, can also lead to burnout and significantly decreased work performance.

Compared to nearly 41% of people more satisfied with their jobs and compensation who contributed equal time to their work and home life, nearly 46% of underemployed people we polled admitted to putting more focus on just their work. 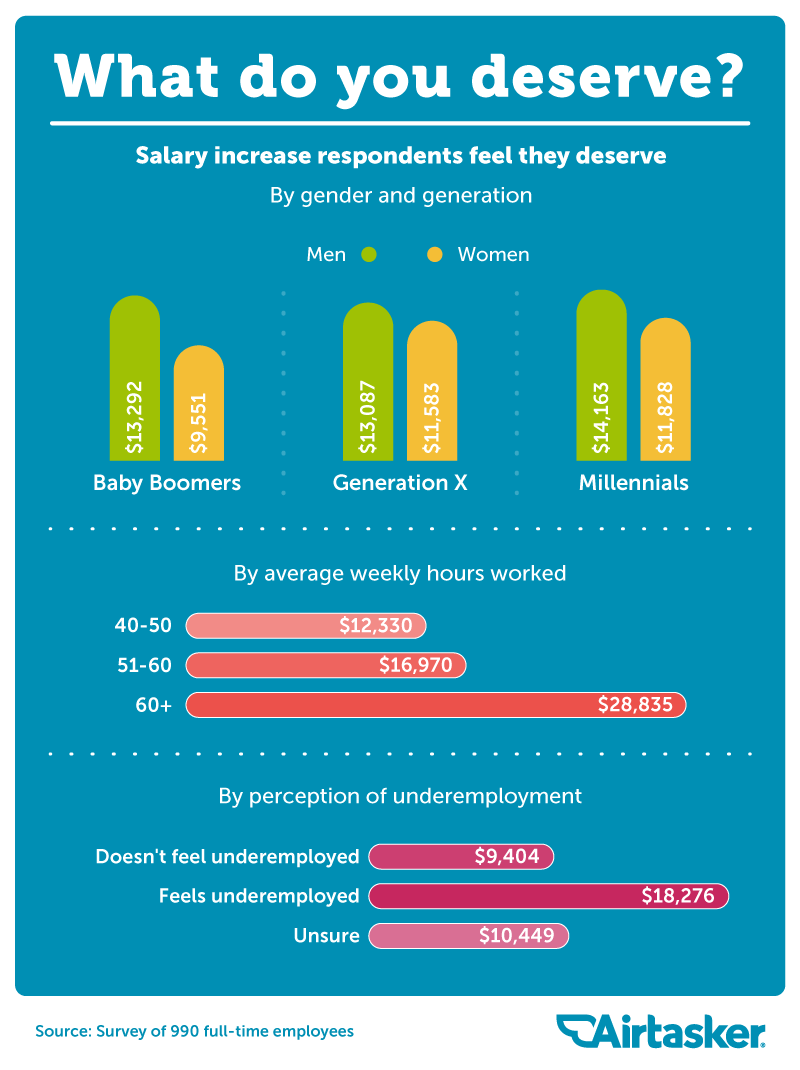 We asked our respondents how much of a salary increase they believed they deserved in an ideal world based on how much work they do for their company.

Highest among millennials, we found younger employees wanted an increase ranging from nearly $12,000 (women) to more than $14,000 (men). Compared to people working a more traditional 40- to 50-hour workweek who would request $12,000 on average, people working 60 hours or more a week believed they deserve nearly $29,000 more a year for their efforts. As one study found, roughly 1 in 5 Americans currently works more than 60 hours a week. Similarly, those who identified as feeling underemployed in their current positions believed they deserve nearly twice as much over their current salaries as those more satisfied with their positions – $18,000 compared to $9,400.

For a majority of people, including about 75% of those who identified as underemployed and 62% of those who did not, compensation was the leading factor in searching for a new job. Money isn’t the only cause of dissatisfaction, though. Among both the underemployed and those who were more satisfied with their jobs, not having an opportunity to develop their skills and simply not liking their jobs were also primary reasons for seeking new employment opportunities.

A vast majority of Americans are living paycheck to paycheck, and many are unprepared for retirement (half have nothing saved at all). Yet, the secret to happiness in the office may not be money.

There’s no denying that compensation is an extremely important factor for overall job satisfaction and fulfillment, but it isn’t the only consideration, and it may not even be the most important. Money is, understandably, less important to employees earning more, but workplace culture is often more likely to drive employee satisfaction.

More than 51% of the people we polled admitted they would rather have a lower salary for a more fulfilling job compared to nearly 49% who opted for compensation over satisfaction. Women (56%) were typically more inclined than men (47%) to vote for happiness over a paycheck, and baby boomers were often more willing to make the same sacrifice in contrast to younger employees. 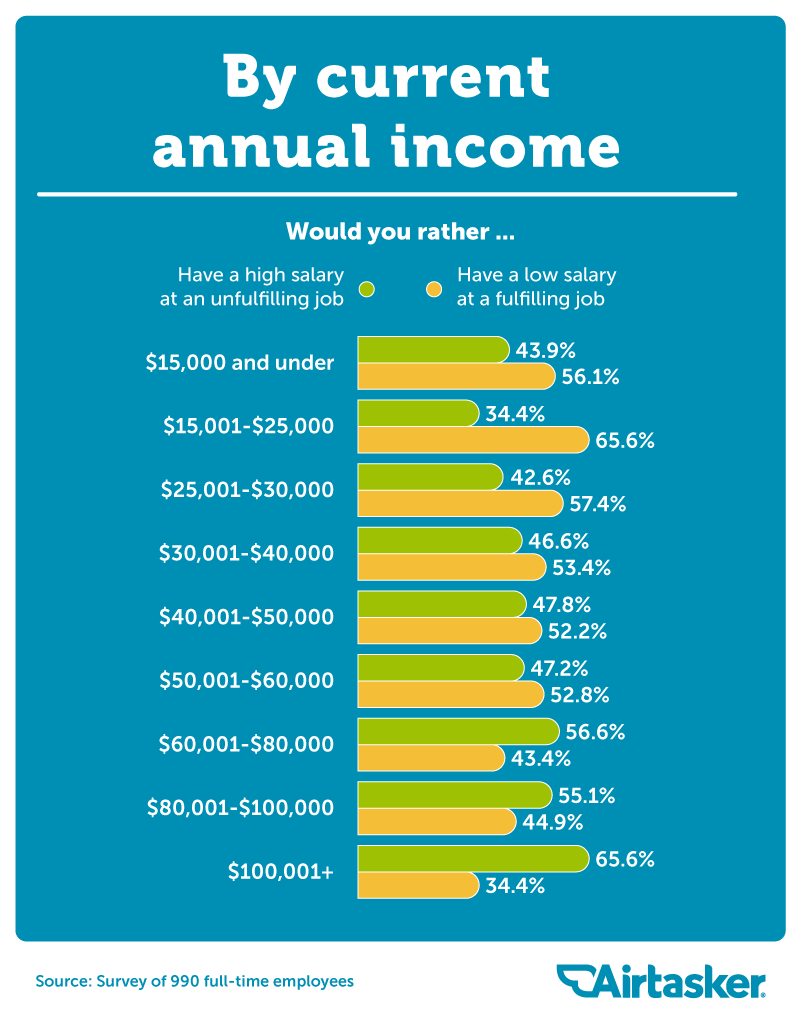 As the saying suggests, money may not be able to buy you happiness, but our survey found that the more money you make, the more you may value compensation over job fulfillment.

Those choosing to accept a position that was more satisfying overall compared to a job that might earn a larger salary was highest among people earning between $15,001 and $25,000 USD – though a majority of respondents earning $60,000 or less made the same decision. Only among respondents currently earning $60,001 annually or more did we find a preference for salary over satisfaction and a willingness to stay employed in a position less fulfilling but more monetarily rewarding.

Underemployment affects people in many of the same ways that unemployment can, though people we polled earning some of the lowest annual salaries were still more likely to value fulfillment on the job than those earning more. Though 2 in 5 people identified themselves as feeling underemployed, we found those rates were highest among millennials who also believed they deserved the biggest raise for their contributions while on the job.

At Airtasker, our mission is to help you find the best support for every job. From cooking and cleaning to computer work and handyman tasks, Airtasker lets you post your project online to attract the best Taskers for the job. Airtasker will even help you select the best budget for your job, so you know what to expect from the very beginning. No job is too big or small with Airtasker at your side. Visit us online today to learn more!

To qualify for this survey, you had to be employed full time and work at least 40 hours a week (as that is traditionally considered full-time status.) All data presented above rely on self-report. There can be issues with self-reported data, such as telescoping and exaggeration. Respondents were given an attention check to ensure they weren’t answering randomly.

Will your readers agree that finding a more fulfilling job is more important than how much money they earn? Find out by sharing the results of our study and any of the related graphics for any noncommercial use with a link back to this page as credit for its creators. 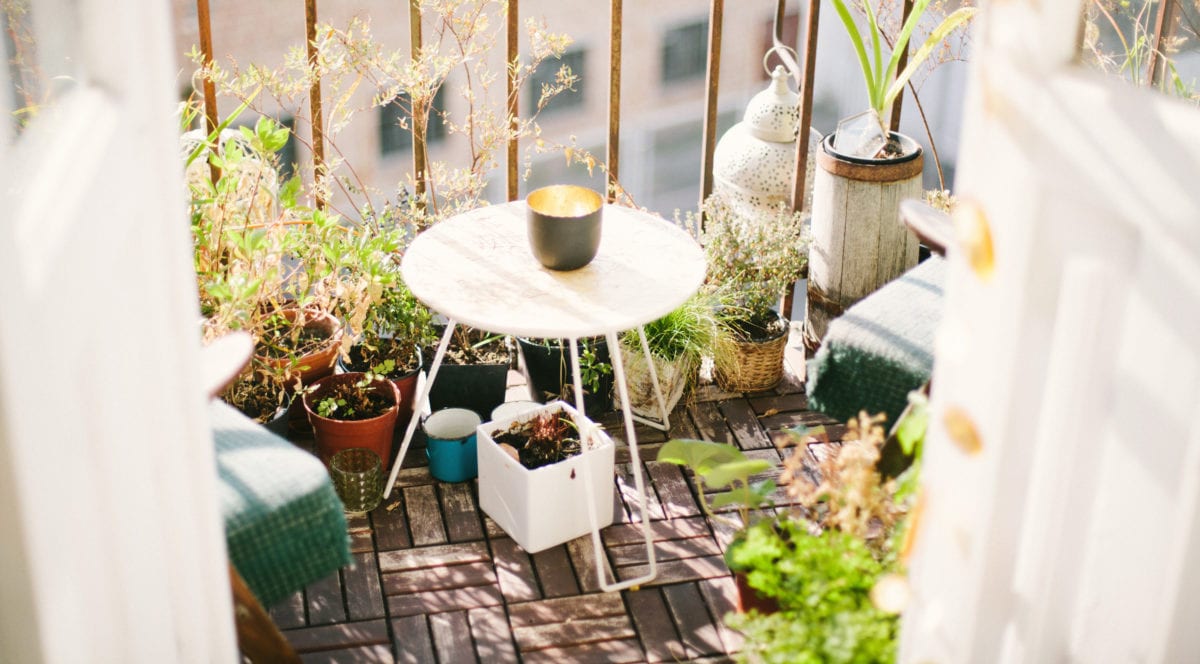