At Airtasker, we’re conscious that our platform is part of the debate around what work will look like over the "How We’re Thinking About The Future of Work" 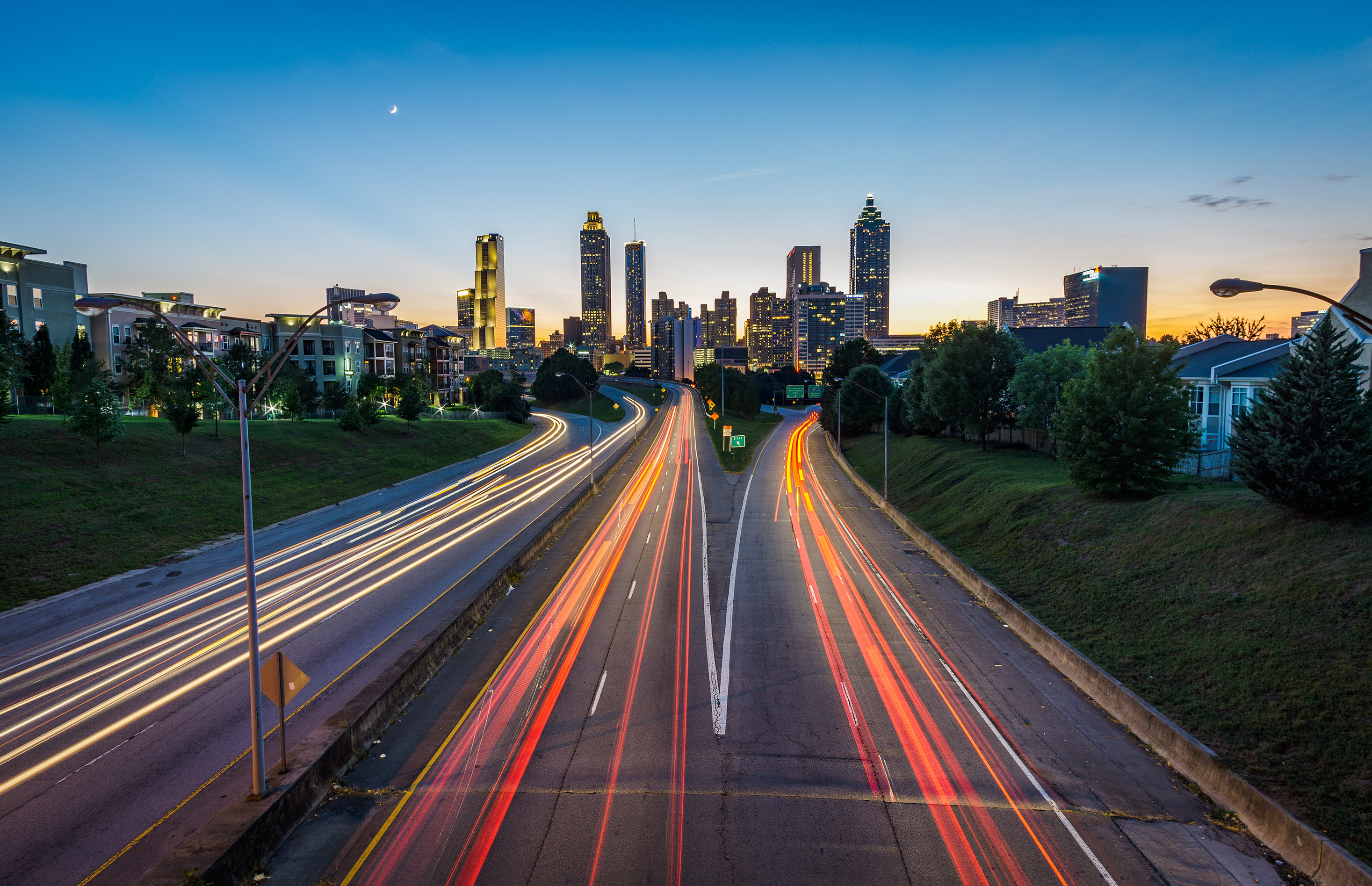 At Airtasker, we’re conscious that our platform is part of the debate around what work will look like over the coming decades.

That’s why we’ve made every effort to be open and as transparent as possible when it comes to questions around our growth, values and future intentions in building the Airtasker marketplace.

We’ve spent the last five years of our lives thinking about how to build a marketplace which will best serve our community members and would like to take this opportunity to clear the air and share some of our perspective.

We exist to create more new jobs for Australians

The vast majority of the jobs on the Airtasker platform are brand new jobs that simply wouldn’t exist in the traditional framework of work. For the most part, we’re creating brand new industries from tasks as simple as removing spiders from homes, as fun as making halloween party costumes or as quirky as providing early-morning motivation for getting fit.

For more established industries, such as cleaning or handiwork, we’re making it faster, simpler and easier to post tasks and find someone to complete them. We’re seeing this ease of use add to the overall amount of work in these sectors – creating new jobs for new workers as well as more jobs for existing industry professionals.

There’s plenty of fear out there about the rise of automation and how robots and other forms of technology intend to replace jobs for humans – we believe Airtasker is actually combating this problem by leveraging each and every person’s unique skills. We believe that creating Australian jobs is absolutely part of the fundamental value we create, not just the by-product of providing a good service for people to outsource their tasks.

We want Airtasker Workers to earn more, not less

On Airtasker, a percentage service fee is charged on the total value of all tasks completed. The more Workers on the platform earn, the more revenue we earn as a business. This revenue keeps our platform running, helps us build new features and spread the word about Airtasker (which in turn helps to create more new jobs).

Whilst a percentage fee can often sound like a more significant figure compared to platforms that advertise lower-sounding offers like “$20 per lead” or “50 cents per click” or “$500 per listing per year” – we believe that the “you win, we win” model provides a much fairer solution and is generally much cheaper (as a percentage of total amount earned by the Worker). This model also ensures that we’re always aligned with the Workers – we’re not incentivised to generate low quality website traffic or send the Workers weak leads that probably won’t result in a sale.

Some people have also suggested that Airtasker might be triggering a “race to the bottom” in terms of the price that people are willing to pay for certain tasks. We don’t want this, as it doesn’t benefit you and — due to our business model — doesn’t benefit us.

In order to prevent a race to the bottom, we have always maintained a “many-to-one” quoting system in which only the Job Poster sees each of the prices offered by the Worker. The Workers don’t see each other’s pricing so won’t undercut each other.

So are we seeing a race to the bottom? In the chart below, you can see that our own internal data shows quite the opposite. As more members with more unique skills have joined the platform, the overall value of tasks has increased year-on-year. 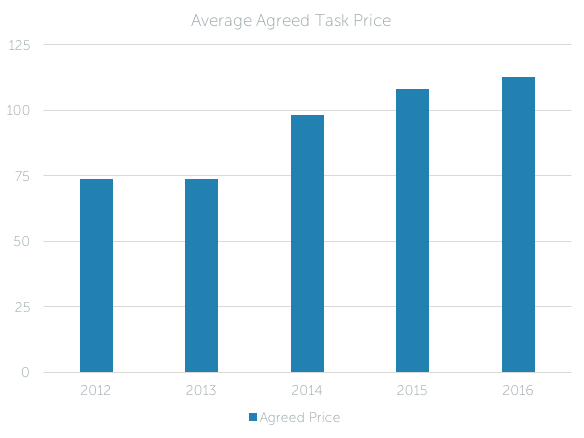 We believe these prices increases are a result of our trusted review system which now hosts more than 350,000 customer reviews based on real, verified transactions. Our experience is that when it comes to services, most Australians emphasise the quality and reliability of the Worker rather than simply choosing the lowest price.

We’ve also seen that top quality, reliable Workers are able to command higher rates. In the chart below, you can see that the “spread” between the price suggested by the Job Poster and the amount that Workers are actually paid has increased over the past years – well regarded, high performing Workers are earning more. 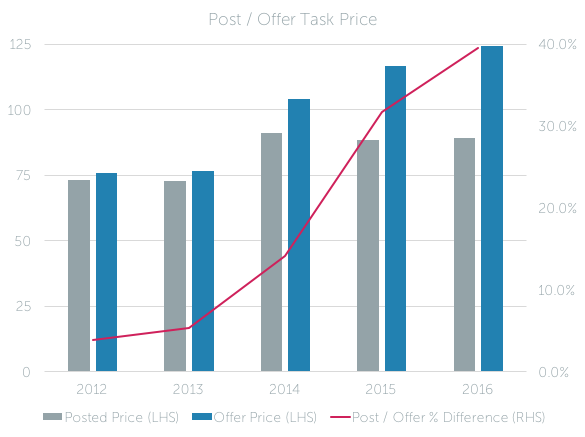 We’re a marketplace for services, not an agency

Our Future of Work research showed that 63% of Australians agree that “the flexibility of working for yourself would make up for the lack of certainty or predictability of the work”.

That’s why we built Airtasker as a marketplace for independent Workers to work directly with their own customers (Job Posters) rather than an agency or an employer. For Workers on Airtasker:

Perhaps even more importantly, we also don’t control how much you earn. You are free to offer any price that you choose to complete a job.

This freedom to choose how much you earn is really important because:

Further, this freedom in pricing also allows the Worker to factor in their own individual costs – for example the Worker may wish to factor in additional superannuation payments, the costs of their own additional insurance policies or other costs such as paying for specific motor vehicles or equipment.

These freedoms and flexibilities are what makes Airtasker an open marketplace platform and quite distinct from the structure of an agency or employer. That said, we absolutely believe that the full-time or part-time employment model is a really great model for specific roles – we employ more than 40 permanent full-time Australian staff in roles such as customer service, software development, product management, marketing and office admin.

But for many jobs, this traditional model of employment simply doesn’t make sense. For example, if you paint your house every ten years, you probably don’t need to employ a full-time painter, right?

So where to from here? We won’t pretend to have all the answers in relation to how people will work in the future. It’s a broad question.

But one thing’s for certain: the way we work is changing. Fast. So we’re going on this journey together and building a platform which we hope can respond to what at least some people are looking for in a job.

If you’ve got thoughts on the future of work or how Airtasker can improve please let us know here.