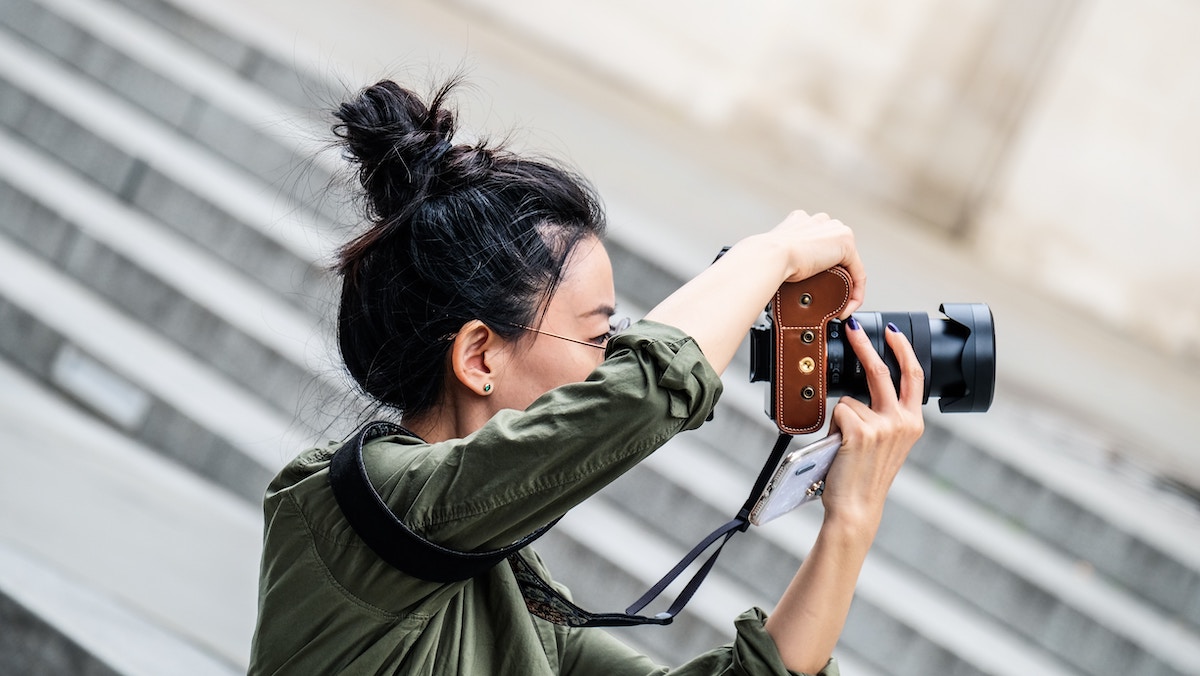 Jumping into the workforce has never been so open-ended. With the digital age presenting such a wide variety of paths, feeling certain in your career decisions can be difficult. And even after you’ve picked a job, you can’t help but feel the grass might be greener on the other side of the job fence. Even if you have chosen correctly, should you be pursuing something on the side?

With the aid of just a laptop (or even a smartphone), online education and side gigs in addition to full-time careers have become commonplace. So how do modern professionals navigate these murky waters? Read on to find out.

Degree of a lifetime? 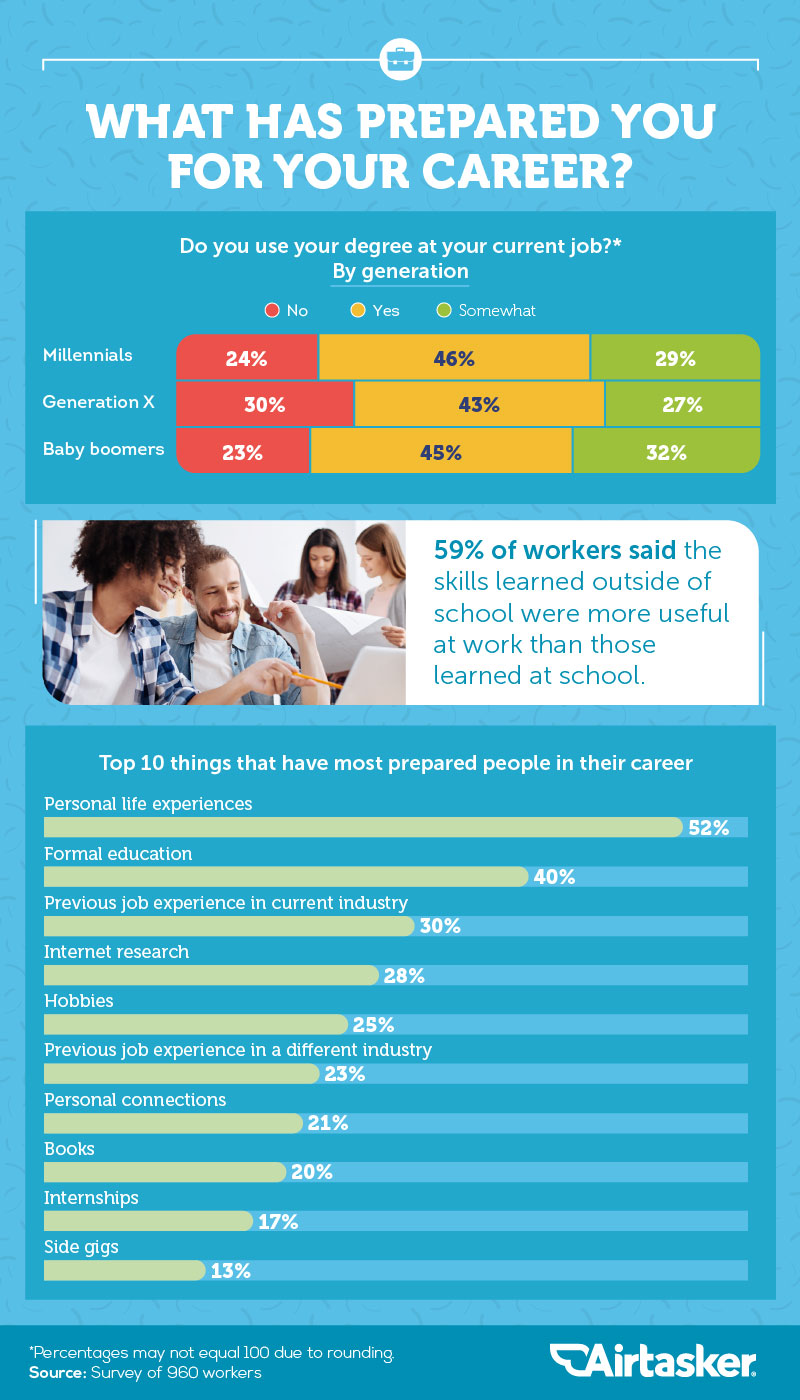 For many respondents, experience trumped education. Fifty-nine percent stated the skills they learned outside of school were more useful for their career than the material they learned in the classroom. But Gen Xers were the most likely to feel this way: 30% felt their university degree was irrelevant to their current career. This number dropped to 24% for millennials and 23% for baby boomers. Although millennials are the most educated generation, they’re also the most indebted. As these young borrowers approach the student loan debt ceiling, they’re turning to majors like information sciences and technology, likely hoping their diploma will translate into a lucrative career.

But if university degrees aren’t preparing every generation for the real world, what is? Evidently, the answer is “personal life experiences,” which, for more than half of respondents, was the top factor that prepared them for work after graduation. Although life experiences clearly vary infinitely between individuals, it’s interesting that they seem to share one distinct commonality: workforce preparation. 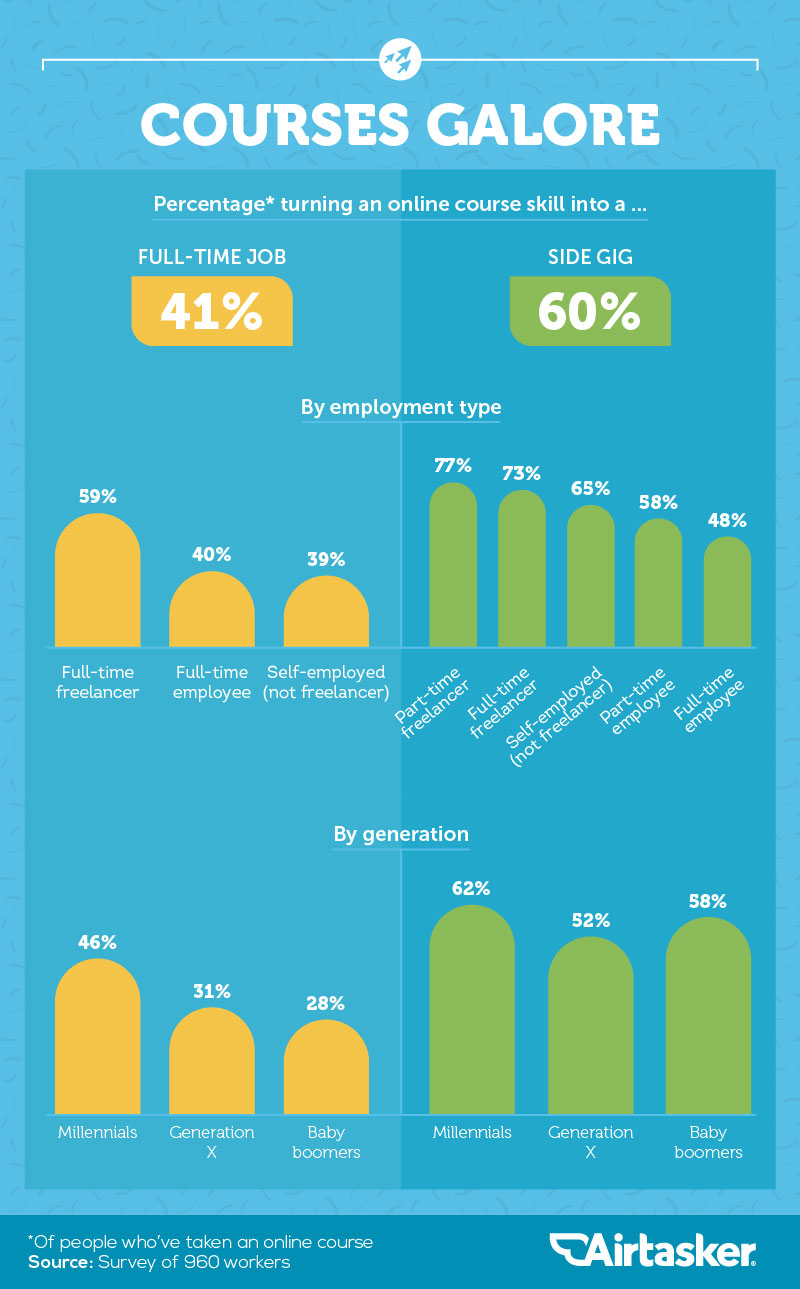 Work and education have both gone digital. Today, 56.8% of people on earth actively use the internet. This prevalence has enabled millions to both work and study anywhere, from co-working spaces to coffee shops or even their beds.

Expectedly, online studying and work are beginning to mix for the betterment of both. In fact, 41% of respondents who had taken online courses managed to turn those acquired skills into a full-time profession. Moreover, another 60% of respondents turned online learning into a side gig. The flexibility offered by online classes, combined with their lower costs and lucrative financial opportunities, may make learning a win-win-win.

Trends in online learning did vary across generational lines. Millennials may be the most educated generation, in part, because of the introduction of online degrees, but baby boomers are taking advantage of online classes nearly as often. Fifty-eight percent of baby boomers (just 4 percentage points behind millennials) turned online training into a side hustle. Only 52% of Gen Xers could say the same. Perhaps baby boomers sensed the need to update their skill sets to accommodate digital modernisation in their own workplaces, ultimately turning to online resources to teach themselves.

Learning on the side 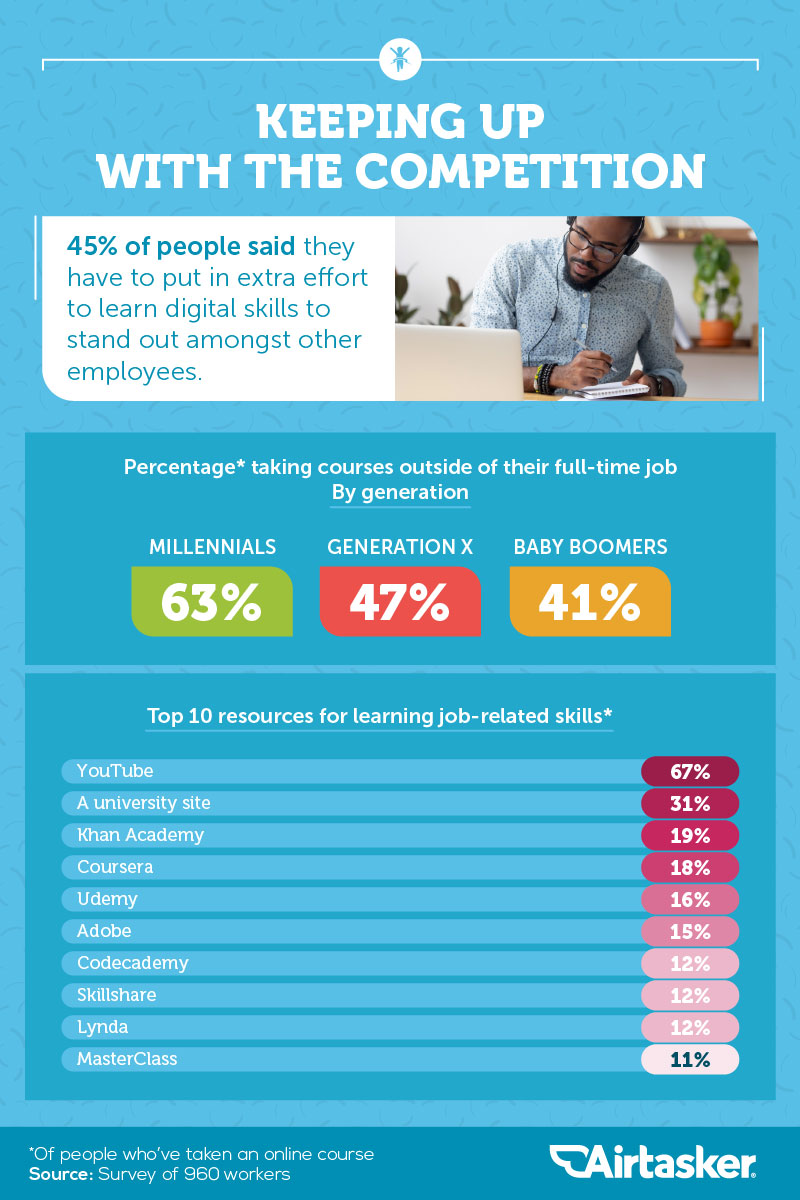 Keep the following statistic fresh in your mind before scoffing at the idea of a YouTube education: 67% of people who had taken at least one online course cited YouTube as their No. 1 resource. In fact, this resource was mentioned more than twice as often as online universities. YouTube’s stockpile of both informative and distracting clips need only be weeded through discerningly to obtain lucrative educational information. Everything from Photoshop to finance can be learned on this platform, and it’s all completely free.

YouTube and other online educational platforms have become essential resources for full-time professionals, as 45% of people mentioned needing to put in extra effort to learn digital skills to stay ahead of a competitive workforce. But younger respondents felt this pressure more keenly: 63% of millennials studied online to keep pace with their peers. With such a wide variety of resources and educational options available, it becomes less feasible to find an excuse for not learning new skills. 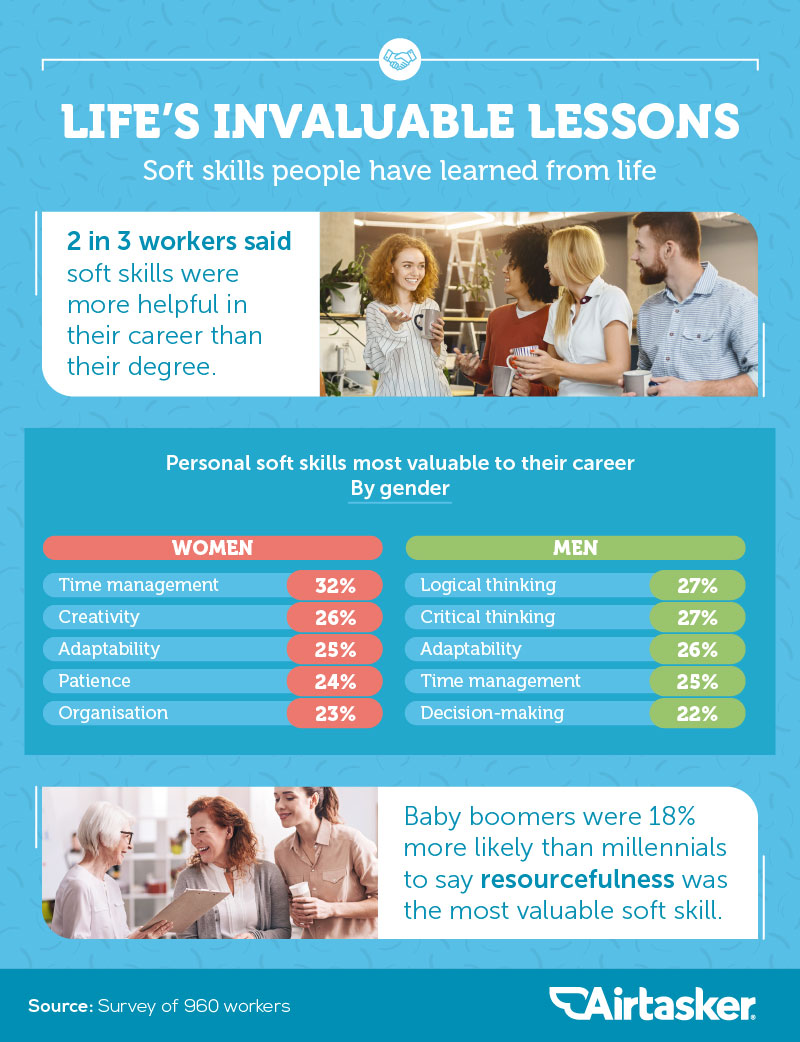 Soft skills, which are defined as both character traits and interpersonal skills, aren’t something you’ll typically find in a course syllabus or a workplace seminar. Instead, they’re innately acquired and developed over time. They also might just be more important than traditional education, for 2 in 3 respondents agreed their soft skills had helped them more in their career than their degree.

Although employers may notice your education and resume first, a demonstration of soft skills during an interview can seal the deal. Moreover, the biggest reasons employees get fired from their jobs rarely concern a lack of hard skills. It’s a lack of soft skills that is much more likely to cause career termination. In other words, job security and soft skills go hand in hand. 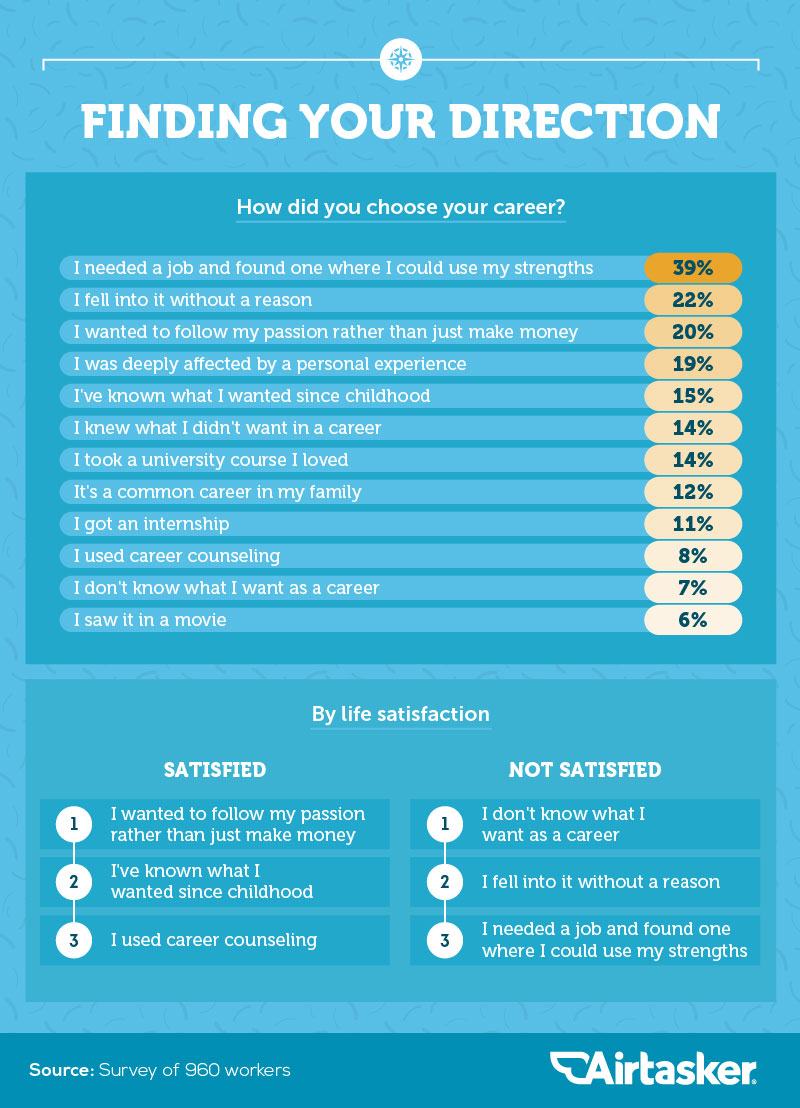 If you can pursue your true passions immediately out of university, consider yourself lucky. For most, careers begin out of necessity. Thirty-nine percent of respondents said they chose their career because they needed a job and found one where they could use their strengths. The next catalyst was completely haphazard: 22% said they fell into their job without reason.

These two career kick-starters, however, also led to downgrades in job satisfaction. Of those who felt dissatisfied, one of their biggest sources of dissatisfaction was needing a job and having to choose one without a reason. The most common, however, was simply not knowing what career they wanted in the first place.

Career satisfaction, on the other hand, was born out of passion. The No. 1 way satisfied workers found their career was through the pursuit of their passions. Many of these happy workers were also lucky enough to have known what they wanted to do professionally since childhood. Most importantly, these employees repeatedly cited the prioritisation of their passions over the desire to make money. With studies having already proved that money can’t buy happiness, consider filtering your job searches by interest rather than salary. 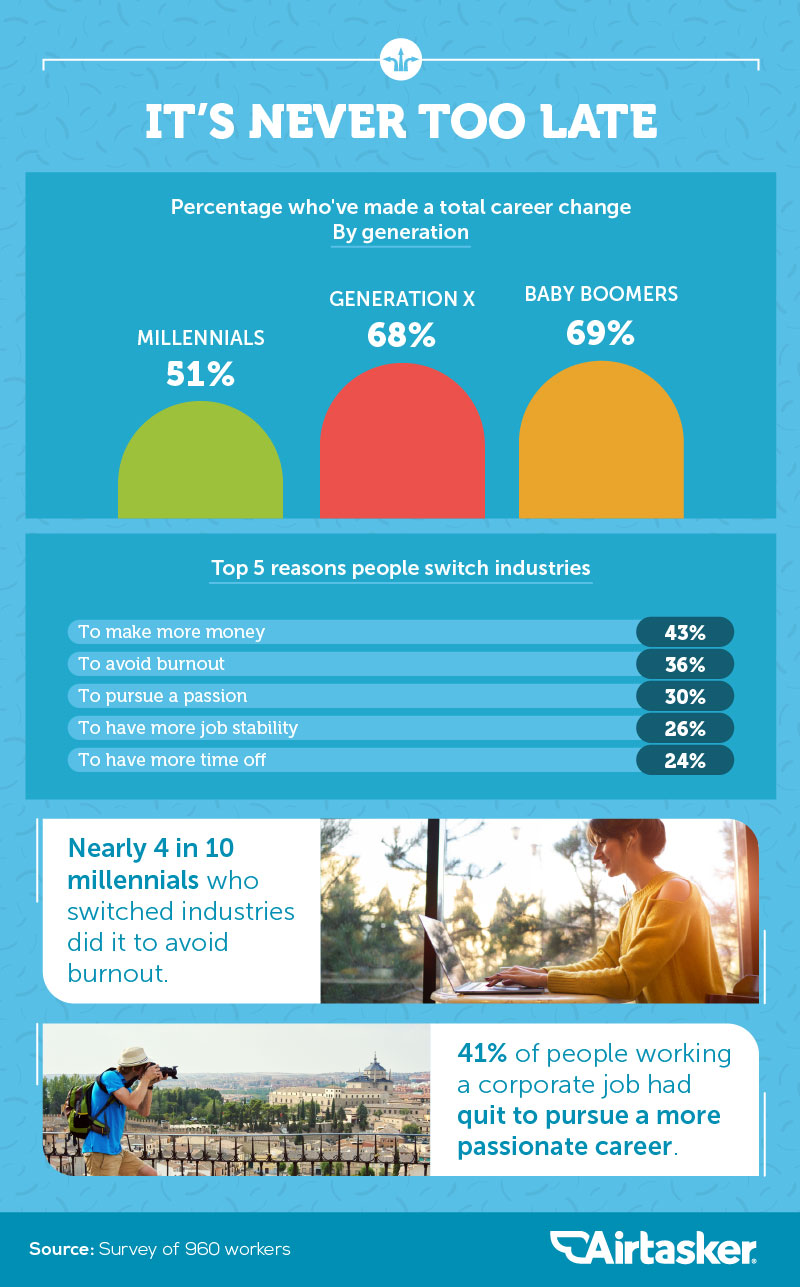 Change can be scary, especially when money is on the line. This doesn’t stop people, however, from making complete career changes at various life stages.

Gen Xers are actually more likely to use social media for longer hours during the week than millennials, which could create an additional desire to switch careers, both because of targeted ads and comparison to their contemporaries. This additional tech usage also often renders them equally or more capable with digital tasks as millennials, opening more doors and opportunities for career changes.

And why do people quit? More often, the answer is money. Forty-three percent of job changers left their industry to earn a higher salary, whereas less than a third of employees switched jobs to pursue a passion. Even burnout was mentioned more often than passion when switching careers. 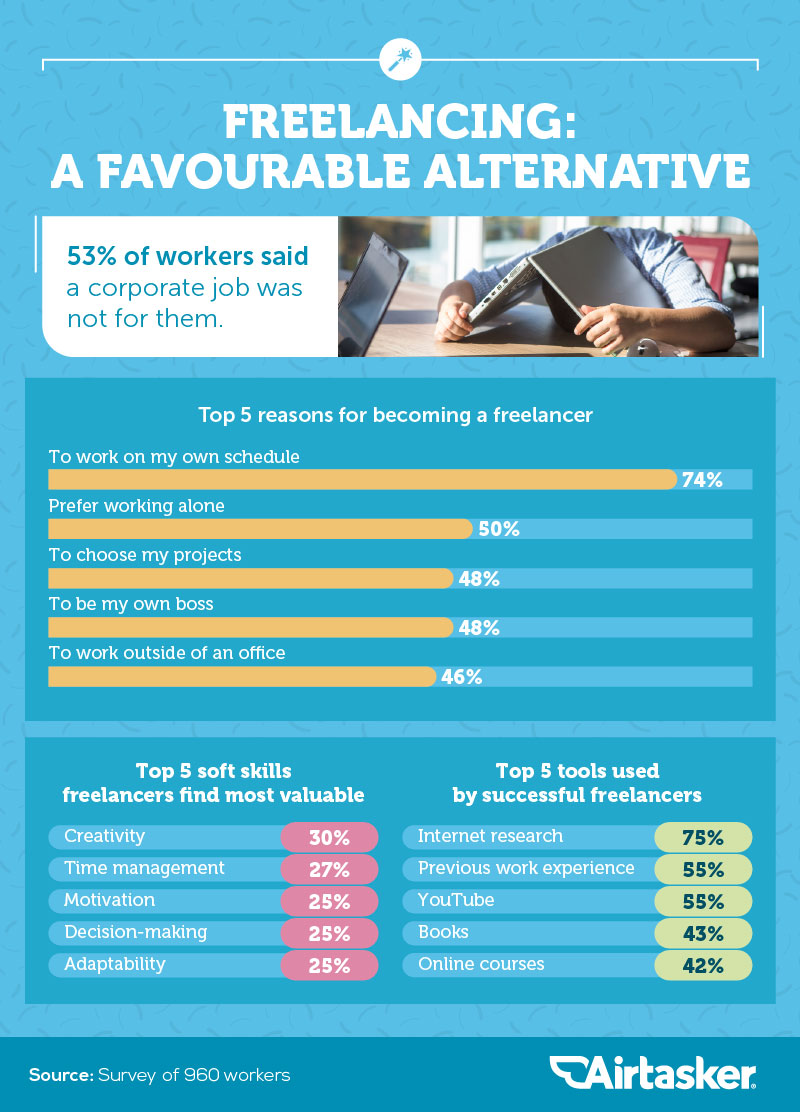 Corporate life reportedly comes with stress, and not surprisingly, that stress isn’t everyone’s chosen path. In fact, 53% of respondents said corporate life was definitely not for them. Instead, freelance presented the preferable option.

Of the many perks of working as a freelancer, the No. 1 reason for choosing this lifestyle was being able to work around personal schedules. Avoiding co-workers also proved popular, as 50% of freelancers mentioned they preferred working alone. This may, however, have more to do with the decreased productivity co-workers can cause as opposed to a dislike of anyone in particular.

Freelancers were also able to let their creativity flow more easily, possibly both in their work and in their methods of job searching. Thirty percent of these respondents agreed that creativity was the most valuable soft skill.

Online or offline? Freelance or corporate? Side hustle or a one-track focus? Of course, these answers are up to you.

Although it’s easy to get overwhelmed by the choices the digital workplace presents, remember to maintain focus on your true passions. And while you pursue these goals, the internet is there to help you. If you need to earn some extra cash or need to outsource some of your tasks to help save time, Airtasker is your go-to. While you’re busy with your side gigs, online courses, and full-time careers, Airtasker delivers the help you need so that you can focus on what you do best: you.

We used Amazon’s Mechanical Turk to survey 960 people who are currently working. Quotas were used on respondents’ current employment status to ensure we had an adequate number of freelancers to participate in the survey. Nineteen percent were full-time salaried employees; 19% were full-time hourly employees; 18% were self-employed (not freelancers); 18% were part-time employees; 15% were full-time freelancers; and 11% were part-time freelancers. Of all respondents, 54% were women, 45% were men, and less than 1% identified with a nonbinary gender. Fifty-nine percent of respondents were millennials (born 1981 to 1997); 25% were from Generation X (born 1965 to 1980); 11% were baby boomers (born 1946 to 1964); 3% were from Generation Z (born 1928 to 1943); 1% were from the silent generation (born 1928 to 1945); and 1% were from the greatest generation (born 1927 or earlier). The average age of respondents was 37 with a standard deviation of 12 years. The data has a 4% margin of error for employees and a 6% margin of error for freelancers. To be considered in our data, respondents were required to a) complete all survey questions and b) pass an attention-check question in the middle of the survey. Participants who failed to do either of these were excluded from the study.

We provided an exhaustive list of the most common online resources to learn job-related skills, and respondents could also enter ones that were not provided in our list. Our list of soft skills included 28 options.

One major perk of the modern workplace is the ease of sharing information. If this is information you would like to share, you are more than welcome to do so for noncommercial purposes. Just be sure to link back to this page so that the authors, researchers, and contributors can receive proper credit for their work.