New Year’s Eve marks the end of one year and the beginning of a new year filled with the promise "New Year’s Eve Fireworks Locations: Sydney, Melbourne & Brisbane"

New Year’s Eve marks the end of one year and the beginning of a new year filled with the promise of opportunity. You might be celebrating at home, a mates, a trendy restaurant or on a boat. However there’s no argument that the best way in Australia is to see the fireworks by Sydney Harbour, Brisbane River or Melbourne Skyline.

Most major cities around Australia will have early fireworks around 9pm to suit the families with small children, followed by the popular midnight fireworks. Before you decide to head into the city for a night to remember there are a few things you need to consider, let’s start with a couple of top tips.

– Choose a vantage point with easy transportation back home
– Get there early or better yet hire an Airtasker to mind your spot
– Pack a blanket, sparklers, funny hats and glasses
– Put together a picnic basket with food and drinks to last the evening

Let’s look at the best vantage points for the New Year’s Eve fireworks in Brisbane, Melbourne and Sydney.

Fireworks are based on the Brisbane River with The Story Bridge and Southbank as the main locations. While the Southbank Parklands is the traditional venue for viewing the fireworks, they have strict regulations regarding alcohol and glassware etc, so it’s important to do a little research before you make a decision.

Other vantage points are:

Mt Coot-tha for an amazing panoramic view of Brisbane.

Portside Wharf provides plenty of places for food and drinks during the show.

Coorparoo means partying with the locals as they line their streets to watch the fireworks.

Highgate Hill brings you nice and close with the fireworks at the corner of Dornoch Terrace and Hampstead Road.

Latrobe Terrace, Paddington goers gather with others on the street to watch the fireworks and then head to a bar or nightclub afterwards for a dance.

From almost anywhere in Melbourne you’ll be able to catch a glimpse of the spectacular fireworks however they are concentrated at several locations around the city.

Federation Square has music and entertainment until the clock strikes 12 however it is a glass and alcohol free zone.

Docklands also has live music and entertainment on the main stage.

Rooftop bars host many New Year’s Eve parties around the city and it’s worthwhile shopping around to find yourself a good deal.

Skyline view can be attained by heading out of the city and getting your own great vantage point.

Sydney Harbour New Year’s Eve fireworks are considered one of the best fireworks displays in the world. In the map below you can see that there are vantage points all over the place, which means you don’t need to travel all the way into the city but stay closer to home. 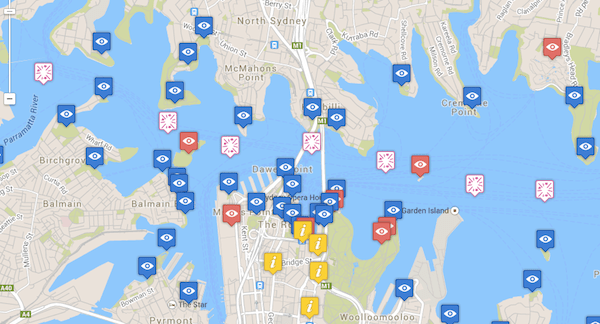 Blues Point right near North Sydney train station is a popular spot for people living north. It is typically a dry-zone and has a capacity, so you might need to get there early.

Royal Botanic Gardens is one of the more exclusive vantage points with only around 700 people allowed and you need to buy a ticket. It’s a family friendly location with no alcohol allowed and food available for purchase.

The Rocks on east Circular Quay allows you to get up close with the fireworks but it does fill up fast and hard to get a spot to sit down.

Hire a boat on the harbour for your own semi-private vantage point, but be wary there are many other boats big and small that you’ll need to look out more. You could also consider buying a ticket to one of the big party boats. You’ll meet a few new people and have a New Year’s Eve to remember. 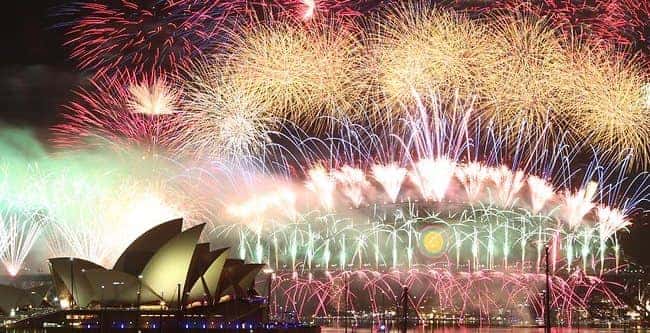 What you need to pack for a picnic in the park