Heather says she’s somewhat of a rarity, “I think I’m the only handy woman in Sydney on Airtasker,” she said. "Airtasker stories: Heather’s your ‘Handy Mam’"

Heather says she’s somewhat of a rarity, “I think I’m the only handy woman in Sydney on Airtasker,” she said.

The UK-expat can do “anything a handyman would do” from curtains and woodwork to landscaping and renovations. 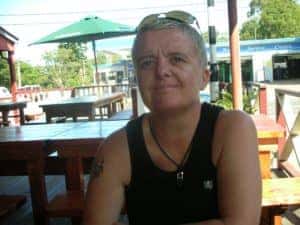 Heather developed her knack for DIY working as an events florist in England. She made floral arrangements for high-society weddings and for Queen Elizabeth II herself during a refurb of the Royal Opera House in London.

But it wasn’t just arranging flowers. Sometimes her work involved building huge arrangements, some 20 feet high, others covering the walls and floors of hotel ballrooms.

Heather changed trades and now runs a gardening and property maintenance business in Sydney’s inner-west. If she’s got no work one day she can just hop on Airtasker and pick up a job. “It gives you clients you wouldn’t normally reach,” she says.

A lot of Heather’s clients are women who she says feel more comfortable with another woman in their home. “Some of them tell me ‘I’ve been waiting for my husband to do this for bloody months!’” she said.

For 50-year-old Heather what makes a great job is good company and the satisfaction of doing it well.

She recently made a wooden cover for an A/C unit for when the owner wasn’t using it that came up real nice. “It looked great and the owner was chuffed. Not only was she pleased with the job, she enjoyed my company” she says.

Heather said Airtasker helps her pick the right job and the right client. “I don’t make an offer for a task unless I know can do it,” she says.