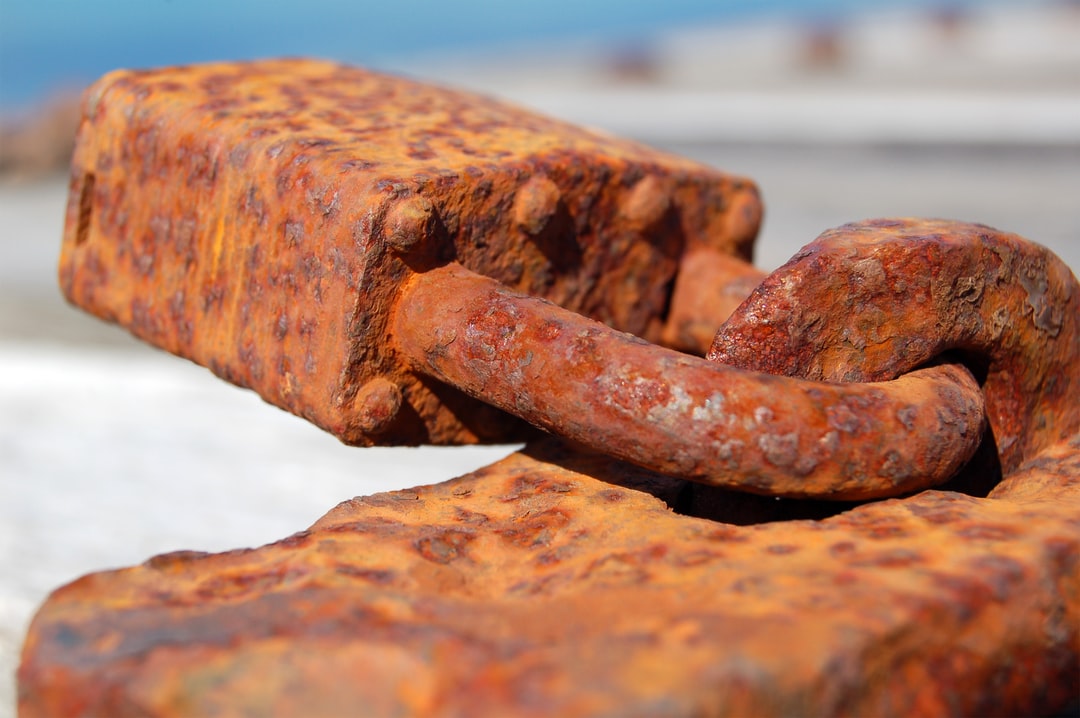 We tend to assume that the sight of rust is a sign that the particular rusted object is done for. What many people do not realise, however, is that you can learn how to remove rust, breathing new life into the implement. The process is also very satisfying as you watch the corrosive stain disappear!

Rust is iron oxide, a naturally occurring process that takes place when the iron is exposed to oxygen over time. Water accelerates this dramatically creating a less-than-pleasant sight which damages the metal. The longer rust is left untouched, the more it corrodes to the point where the metal is no more.

How to remove rust with vinegar

It’s awesome how natural cleaning products can be used in just about any cleaning situation including, oven cleaning, drain cleaning, or even simply descaling the kettle.

How to remove rust with a lemon

If you can’t soak or fit the rusty components into a bottle, lemon or lime with some salt will do the trick.

You don’t want to scrub too hard with the steel wool as the rust should be pretty loose at this point, so loose in fact that the rind is abrasive enough to do the trick.

How to remove rust with baking soda

Another rust-remover you likely have around your home is baking soda and a toothbrush.

Another version of this method involves hand soap and a potato (we don’t know, or how, this was found out) but you can cut the potato in half, and rub it all over the soap then leave this on the rust for a couple of hours, followed by some scrubbing to fully remove.

How to remove rust from chrome

If a section of your vehicle has a beautiful chrome finish that is starting to see some rust, you’ll likely want to rectify the situation quickly. Chrome isn’t a metal, but the coating that creates the decorative feature is, and that is susceptible to rust.

The best way to remove rust from chrome is via the aluminium foil method, which requires these steps:

How to remove rust with some serious elbow grease

Particularly hard to remove rust can be targeted by scraping. This is the method you may want to use if you are dealing with a large and easily accessible area, like a car.

The choice of the scraper will depend on how bad the rust is. Thick rust is best attached with a paint scraper or screwdriver. Steel wool or coarse sandpaper works well, and the job is made significantly easier if you have a power sander. The trick here is being careful not to scrape or damage the underlying metal while cleaning off the rust.

How to remove rust stains

Annoyingly, metal is not the only victim of rust. Clothing, and pretty much anything else that comes into contact with rust can be in trouble. Rust stains are best removed with lemon juice.

If the rust stains are not only clothing but are on a wall or patio, a stiff wire brush with some water should do the trick. Just wet the stain then brush firmly. You can make this a bit easier by using a cleaning product which has oxalic acid as an ingredient.

How to remove rust with electricity

While this certainly isn’t the most straightforward method, electrolysis is a great way to remove rust; you just have to be very careful (and you should probably leave to a mechanic or electrician). Use a car battery charger and place the rusted implement into a basin of water large, so it is fully submerged. You’ll also need a piece of ‘sacrificial’ iron and some washing powder.

Plug the charger in, switch it on, and leave it overnight. In the morning, unplug the charger and disconnect the terminals and all of the rust should be gone! If not, you can repeat this process as many times as necessary until it is.

How do you remove rust naturally?

The most natural way to remove rust is with a lemon or lime and some salt. Simply coat the rusted area in the salt and squeeze the lemon or lime over it. Allow it all to sit for two or three hours then scrub it off with a scourer or steel wool.

Another natural rust-remover is baking soda. Just pour it into a bowl and mix in some water to form a paste. Apply the paste to the rusted area and let it sit for a couple of hours then give it a good scrub with a toothbrush to remove the rust.

How long do I soak metal in vinegar to remove rust?

Once you have placed your rusted object into a container full of vinegar and given it a shake, let it all sit for a day or so. After this, you can drain the vinegar, and reveal your new, clean object. If some rust still remains, repeat the process and leave it to sit for a little bit longer, so the acid has more time to eat away at the rust.

What is the best homemade rust remover?

When it comes to homemade rust removing solutions, you have a few options. These can include:

All of these are effective at removing rust; it may just take a few tries to remove all of it, dependant on how severe the rusting is.

Your choice of solution will also be dependent on the item you are trying to clean. All of these options require the object to be submerged in the solution with the exception of lemon juice (which can be placed on a surface) and, of course, the scraping option. If you are cleaning rust off a brick wall, a stiff wire brush with some water should be an effective form of removal.

Hopefully, one of the processes above has done the trick, and your items are now rust-free! The ease of each method will ultimately depend on how severe your level of rust is, the sooner you get to the rust, the easier it will be.

For this reason, try one of the above options the moment you see any rust start to appear and you’ll not only be in for a quick cleaning process, but your item will see the most extended lifespan possible!

Step by step instructions on how to build a retaining wall

How to clean your white shoes so they look brand new

How to propagate plants at home

How to stain wood and furniture like a pro